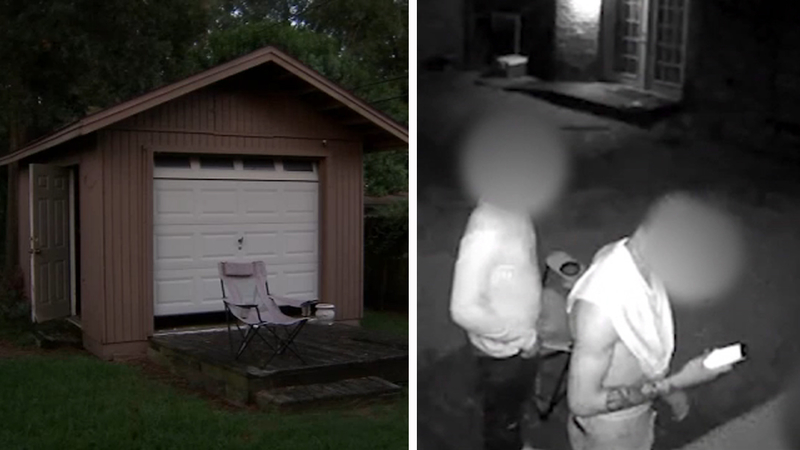 CLOVERLEAF, Texas (KTRK) -- A police chase involving a group of teens ended in a man's backyard Saturday night and that's just the beginning of the story.

"A lot of things could have gone wrong, but someone was watching over somebody," Ric Copeland told ABC13.

It was around 10:40 p.m. Saturday, according to the Harris County Sheriff's Office, when deputies were searching for suspected car thieves. They had dumped two stolen vehicles after speeding away from officers on Oakleaf Lane in Cloverleaf.

Copeland was alerted to the potential danger outside by his security cameras. One captured the teens running by. He found his back gate open and then heard noises in the backyard shed.

"I knew something was wrong," Copeland recalled. "You could hear them talking in there. They were all rumbling."

Out front, deputies were searching for the suspects. Another camera captured them piling into the shed. Copeland summoned a deputy who ordered the suspects out.

"He had his gun drawn, saying 'Get down, get down. Everyone out.' They came out. Busted out and were running."

The teens took off over the fence and eventually got caught. Copeland discovered two loaded guns, which deputies recovered.

He is thankful no one was hurt and praises the deputy for keeping his composure and not firing his weapon when the teens ran out of the shed.

According to the sheriff's office, the suspects are all juveniles so their identities are not public. They are charged with evading arrest.

Copeland hopes this run-in teaches them a lesson.

"I wish they can see what they've done and turn it around, because they're still young enough to do that. Anybody can turn anything around. I believe that."