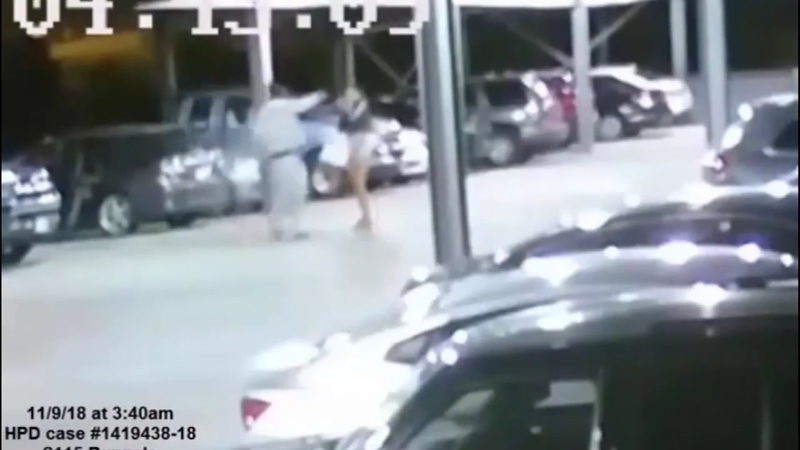 HOUSTON, Texas (KTRK) -- An armed robber cocked his gun and held it to a woman's head just before he and his accomplices took off with her purse and car, only to use it a day later in another armed robbery.

The 23-year-old victim, who wants to remain anonymous out of fear, tells ABC13 the armed robbers followed her into the parking garage of her apartment complex on Runnels, east of downtown. The headlights of their vehicle were off. She was on the phone with a friend.

Surveillance video then captured what happened in the early morning hours of Nov. 9. When the victim got out of her car, the gunman rushed her, cocked his gun and then pointed it at her head as he demanded her cash and car.

RELATED: How to avoid becoming a target for thieves while holiday shopping

What you're doing wrong while holiday shopping

Houston police have tied the four suspects involved to at least two other armed robberies. One was just a day later, in another apartment complex parking garage around the corner on Canal.

In October, the suspects targeted a worker on Uvalde in east Harris County. According to authorities, the suspects assaulted and robbed him. Now, investigators are using images from that scene to try to identify them before they strike again.

The victim regrets being on the phone when she got out of her car.

"Just be aware. That's all I can say. Just be aware, especially at this time since it's the holidays," the victim said. "Obviously, there's a lot of robberies going on. I would just want everybody to be aware of their surroundings. In the video, I was definitely not aware of my surroundings and now I'm very aware."

Anyone with information is urged to contact Crime Stoppers at 713-222-TIPS. A $5,000 reward is being offered for information leading to arrests.