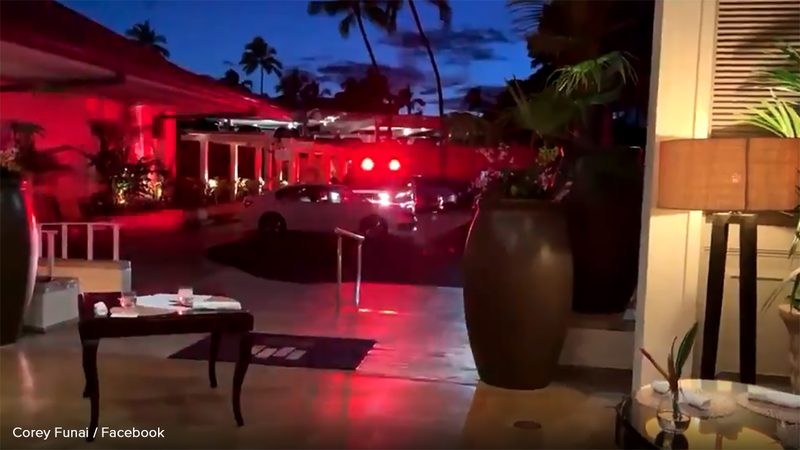 HONOLULU -- The armed man who barricaded himself inside a hotel room at a resort in Honolulu and fired shots through the door was found dead from a self-inflicted gunshot wound, Honolulu Police say.

This is a breaking news update. A previous version of this report is below.

An armed man who barricaded himself inside a hotel room at a resort in Honolulu and fired shots through the door was still in a standoff with police Sunday morning.

No one was hurt in the gunfire late Saturday at The Kahala Hotel & Resort, Honolulu police Capt. Brian Lynch told news outlets. The luxury resort said in a statement that hotel security and law enforcement evacuated the area around the room.

"Everybody is accounted for," Lynch said. "We're just waiting for the suspect to give up."

Shots were fired at around 6 p.m., according to police. Hotel security staff went up to the room where the man was located and knocked on the door. He then fired through the door multiple times, police said.

Authorities have not released any details about the events leading up to the stand-off. Police believe the man is in the military.

Photos and videos shared by local media showed about 100 people locked down in the hotel's ballroom. Displaced guests were provided with food, blankets and pillows. Hours after the standoff began, guests sheltering in place were allowed to leave.

Images from outside the resort showed a large police presence, including a SWAT team.

Kahala resident Yevgeniy Lendel told Hawaii News Now he was walking in the area when officers rushed to the scene.

"The cops told everyone to run and shelter," he told the TV station. "We ran away from the hotel."

The standoff occurred during what had seemed to be a quiet evening at the resort. Visitors and locals were eating at beach-side restaurants and taking in the sights.

Honolulu resident Rex Jakobovits said he was strolling on the beach when he was told by police to get into the hotel's ballroom. He told Hawaii News Now that when he got inside, people were frightened. Some were crying.

However, Jakobovits said the mood eventually calmed after officers were posted outside the doors.
Report a correction or typo
Related topics:
hawaiibarricaded manhotelshots fired
Copyright © 2021 by The Associated Press. All Rights Reserved.
More Videos
From CNN Newsource affiliates
TOP STORIES