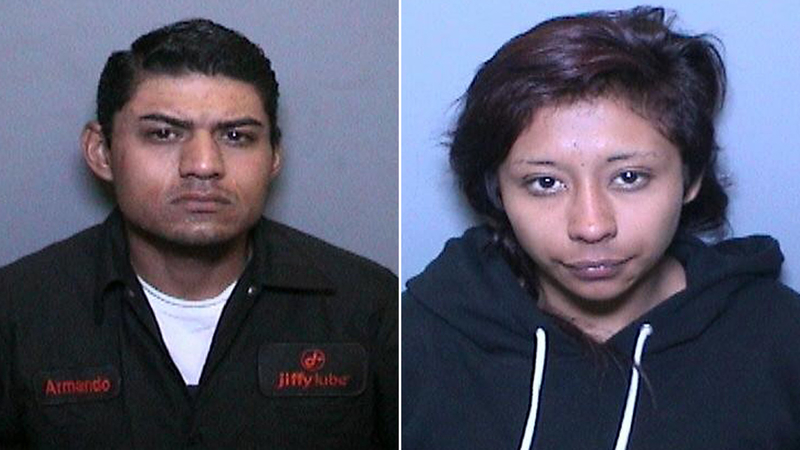 WESTMINSTER, CA -- Two people were arrested for impersonating officers after they attempted to pull over an off-duty officer.

California Highway Patrol says 26-year-old Armando Perez of Aliso Viejo and 20-year-old April Fabian of Laguna Hills attempted to pull over an off-duty police sergeant with the Irvine Police Department at about 12:30am on Tuesday.

Perez and Fabian were in an old Ford Crown Victoria using a red and blue flashing strobe light on the northbound 405 Freeway near Euclid Street, according to CHP.

"He called 911 and called in the suspicious circumstances. At that point they also tried to use a clear spotlight to illuminate his vehicle to try to get him to pull over, he obviously refused to do so wisely," Officer Tom Joy with the California Highway Patrol said.

CHP pulled the suspect vehicle over on Beach Boulevard just off the 405 Freeway. Officers said they found evidence that Perez and Fabian were impersonating officers, including replica guns.

Authorities said this may not have been the first time the two had tried to pull someone over.

"This doesn't happen all that often, but we are going to seek information hopefully your viewers will call in if they've been the victim of similar acts," Joy said.

CHP said if you're ever pulled over at night, you should first look for markings on the side of the car or SUV.

Most legitimate police vehicles will also have a light bar across the top of their car.

You may also ask the officer to see their ID. If you still have any doubts, you're urged to call 911.

"It's going to go to our dispatch center and they can confirm, 'Yes one of our officers who is legitimate is trying to stop you,'" Joy explained.