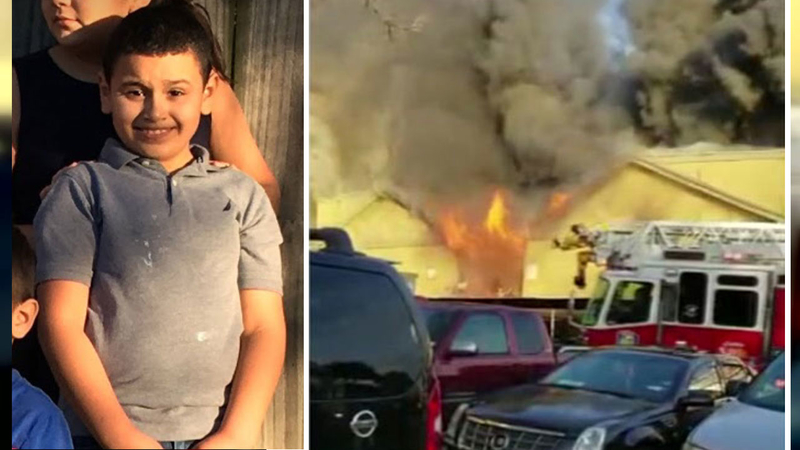 Father badly burned trying to save 10-year-old from fire

HOUSTON, Texas (KTRK) -- A family will spend Christmas in mourning after losing a 10-year-old child and their belongings in a devastating apartment fire in southwest Houston.

Arson investigators are still on scene trying to determine what sparked the deadly blaze Monday morning in the 7000 block of South Gessner Road.

Sixty families were left homeless as the fire ripped through their units just after 8 a.m.

Houston firefighters are responding to a 2-11 Fire in the 7000 block of South Gessner Rd. Please avoid the area.

While Pedro Guerra was able to throw his younger children to safety from their third-floor apartment, 10-year-old Angel was killed in the fire.

He and his family were trapped by the flames when the fire first started. Pedro is spending Christmas Eve in the hospital, recovering from severe burns.

"My heart is feeling very bad," said Alex Iraheta, who helped his neighbor save his children from the fire.

More than 100 firefighters responded to the deadly fire.

Firefighters say one child is dead and another resident is at the hospital. One firefighter is the hospital, but expected to be okay. 60 people lost their homes on Christmas Eve. https://t.co/9Q2UNnoAfb pic.twitter.com/SAJZkxeqj8

Confirmed injury in 2-11 fire on Gessner. Fire is still active. PIO in route.

After putting out the flames, firefighters started handing out gifts to residents.

Many of the displaced families are now heading to a temporary shelter, where they will spend the Christmas holidays. These may be the only gifts they open this year.

The Guerra family has launched a GoFundMe account to help pay for Angel's funeral.

Firefighters are giving toys to kids who lost everything on Christmas Eve. #abc13 https://t.co/9Q2UNnoAfb pic.twitter.com/xRqu34QXaE