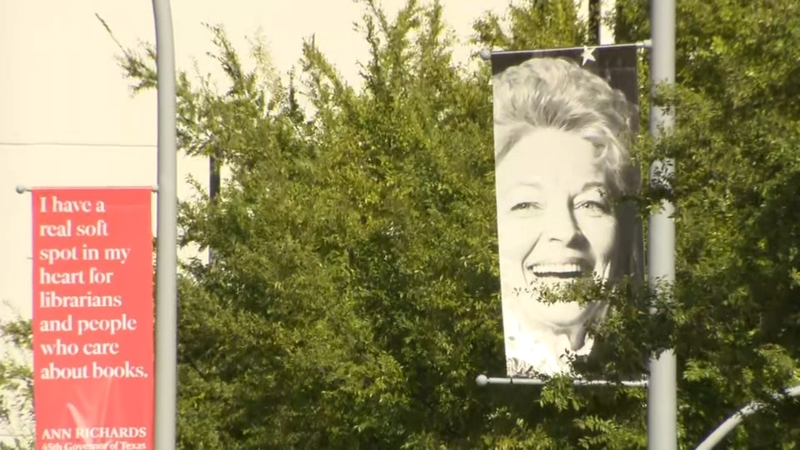 HOUSTON, Texas (KTRK) -- The City of Houston is paying tribute to the legacy of a beloved Texas - and indeed, national - figure, legendary governor, Ann Richards.

If you visit the intersection of Dallas and Austin in downtown Houston, you'll see 50 new banners honoring Gov. Richards, the 45th governor of Texas.

The 50 banners along Dallas feature various photos of her from her childhood, into her years serving as governor.

They also feature some of her famous quotes, showcasing her humor, which she was known for, as well as her wisdom. They aim to reflect her fiery character and commitment to "make government look like the people of Texas," according to press materials.

Richards was a Democrat, and is remembered not only for her work ethic, but also for hiring women, people of color and members of the LGBTQ+ community to Texas boards and commissions.

She was the second woman to hold Texas' highest office, but was widely considered to be the first to be effective. Here's a look back at 30 years ago.

Houston is the fourth city to feature the banners. Austin, Dallas and San Antonio also have them on display.

"Ann liked to shake things up, and she believed that for our democracy to stay healthy, they deserved a government that looks like them, and a government that worked for them," said Margaret Justice, director of the Ann Richards Legacy Project.

Richards was born in Lacy Lakeview - located in the Texas Hill Country - and graduated from Baylor University.

A mother of four and grandmother of eight, Richards was also known for championing Texas prison reform, the environment and the arts.