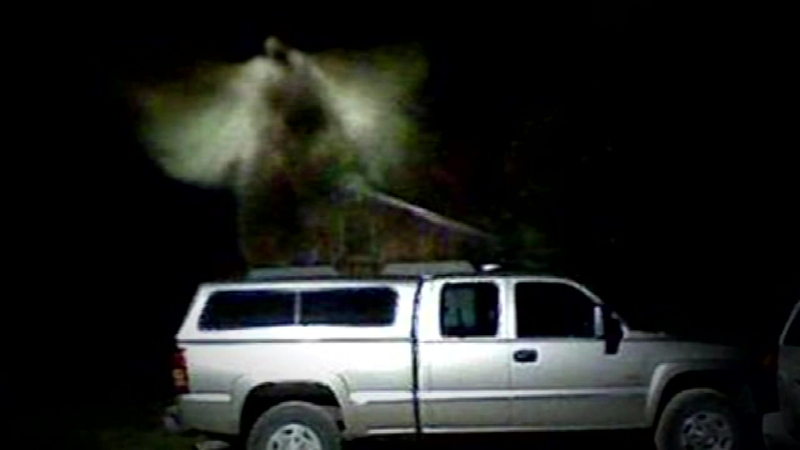 EAST JORDAN, Michigan (KTRK) -- A Michigan fire chief says his cameras captured an image of an angel above his truck.

Glen Thorman said his motion sensor activated home camera caught the image of what appeared to be an angelic figure moving out of frame.

The church posted the photos on its Facebook page last week with the caption: "Last night at the Thorman's house, the security camera recorded this snapshot. Glen Thorman is the fire chief for East Jordan ...( they attend Jordan Rivers) Yep folks... It's an angel. I guess there is no question who is watching over their residence while they sleep, and yes, they pray that The Angels of the Lord will surround them and their property....These photos have not been altered in anyway. The second photo, the security camera also shot because the angel was moving away. The camera is designed to photograph anything in motion or unusual.... lots of tears today when they opened the security on their camera ...WOW!"

"I said 'That's an angel!' And I was just blown away," Thorman told WPBN. "I couldn't wait to send it to my wife and send it to Deneille. And I said 'I got an angel, and my camera took a picture of an angel.'"

"This is awesome. Thank you Lord for your protecting angels," Nola C. wrote.
"Awesome. I always knew angels were with you Rhonda and Glen keeping you and your family safe. Good to see," "Gloria T said.

"I am a believer and this photo is exactly what happens but without notice! Thanks for firming my beliefs in life everafter the loved ones are always closer than what you think! AMEN!!!" Thomas R. wrote.

A photographer weighed in on the photo and said that the image is moth-shaped, saying that you can see what appears to be wings and a head.

"But at the same time since it's not clearly in focus and since it is what it is, there may be room for interpretation," Joe Clark said.

Couple sees an image of Jesus in their child's sonogram