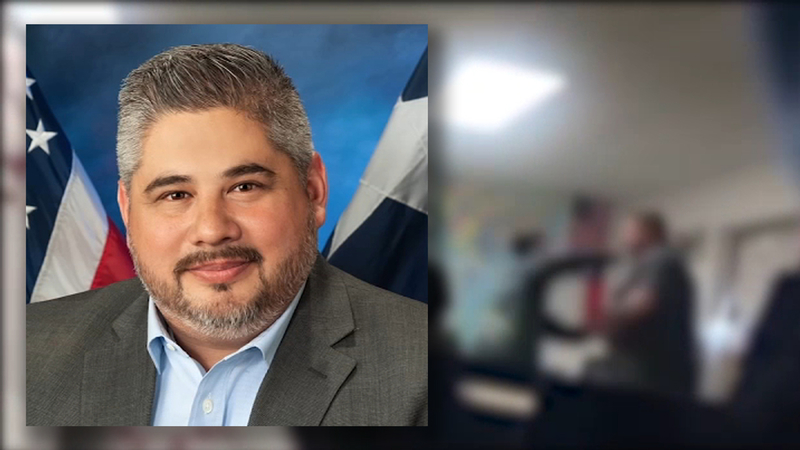 HOUSTON, Texas (KTRK) -- An Austin High School senior arrested for assault says several videos prove that he was provoked by his teacher.

The fight happened Dec. 12 in an economics class taught by Victor Trevino III. The altercation was captured by multiple students' cell phones.

In videos, you can clearly see 18-year-old Andrew Henriquez hitting Trevino before several others got involved.

"I was wrong for doing that," said Henriquez, who was arrested following the incident. "I could have controlled (my emotions) better, but it was really hard. We were face to face and he's telling me, wanting me to hit him."

Henriquez was charged with assaulting a public servant, and spent the night in jail. However, he points to a part of the video where Trevino could be heard saying, "go ahead," showing that he was in fact provoked.

"He wanted the fight. And it's on camera," said Henriquez.

They both agree that the dispute started when Trevino tried to get Henriquez to put down his phone. Henriquez admits he was arguing with his girlfriend on the phone, and he was being loud.

Through his lawyer, Trevino issued a lengthy statement, including the following:

Mr. Trevino never walked toward the student, made a threatening gesture, cursed at the student, and never punched or struck the student. Immediately after the student punched Mr. Trevino he took defensive action and immobilized the student, which the video clearly demonstrates. Mr. Trevino took only the action that was necessary to protect himself as well as his students from further assault from the unruly and out of control student.

Henriquez's mom disagrees, saying the teacher should have worked harder to diffuse the situation.

"He should have escorted him out, called someone from the office to get him out of the class," said Roselle Trevino, who is not related to Victor. "But he didn't, he just kept on and on, and egging him on. I just feel he was being provoked."

Nobody at HISD would confirm whether Trevino is on administrative leave or still in the classroom. Thursday was the last day of class before HISD's winter break. When classes resume in January, Henriquez will be going to alternative school, which he readily accepts.

"I was wrong for hitting him, I really was, and I'm willing to suffer the consequences for that, but I feel like he should suffer consequences as well."

Below is the full statement by Victor Trevino III, through his attorney:

Mr. Trevino is still employed by the HISD.

This unfortunate incident occurred because a student chose to violate the class and school rules by talking on his cell phone during class time. He was being very loud and abusive to what Mr. Trevino assumed was a young lady on the phone by using foul language and threatening to beat her up and kill her. Mr. Trevino directed that student to hang up his phone and leave the classroom. It was at that time that the student began cursing and threatening Mr. Trevino. Eventually walking across the room directly up to him and punched him in the face. Mr. Trevino never walked toward the student, made a threatening gesture, cursed at the student, and never punched or struck the student. Immediately after the student punched Mr. Trevino he took defensive action and immobilized the student, which the video clearly demonstrates. Mr. Trevino took only the action that was necessary to protect himself as well as his students from further assault from the unruly and out of control student. Other students stepped in to assist in restraining the student who was completely out of control.

The Harris County District Attorney's office accepted assault charges of a public servant against the student for assaulting Mr. Trevino. This was a scary and charged incident that Mr. Trevino did his best to keep under control. One never knows how or to what degree a student will overreact when told to follow the school rules.

Mr. Trevino is grateful that there were students in the room who jumped in to assist him at the time he most needed it. He remains very concerned for the young lady the assailant was originally speaking to on the phone, which seemed to be his girlfriend and prays that his actions helped her in some way.