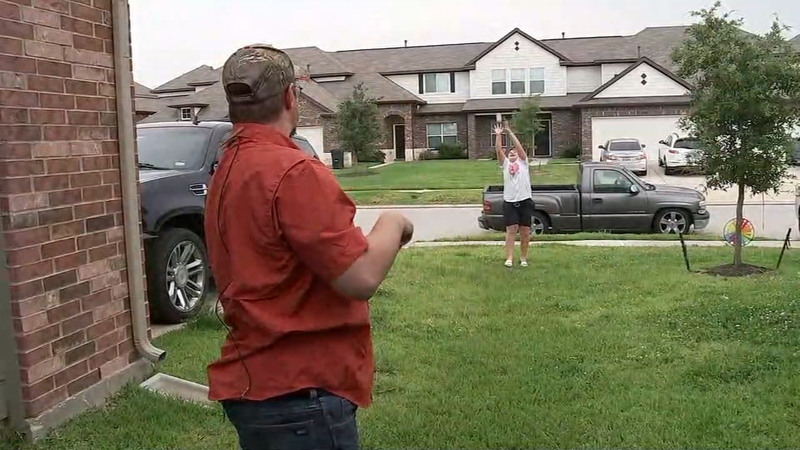 HOUSTON, Texas (KTRK) -- Six months ago, Jake Dowdy was returning from a trip to the corner store on his Harley. His life was changed in a few seconds.

A driver on C E King Parkway pulled around a line of traffic, and hit Dowdy.

It was Dowdy's decision. Speaking with his wife, "I said, 'Well, I've still got an arm to hug you, so let's take this one off.'"

Dowdy was at Memorial Hermann for weeks, with his large family by his side.

"I can't let down when I see all those smiling faces looking at me," he said Friday night, as he looked at his wife and their five children.

Some would question why they would lose part of themselves in a traffic crash. Dowdy is not among them.

"I believe that it doesn't matter how many times you get knocked down, you have to keep moving forward. It's going to be OK," he said.

Dowdy started moving forward when he received a prosthetic leg. That allowed him to return to Conoco Phillips in Baytown, where he works as a logistical coordinator.

He's also adapting to a prosthetic arm, which attaches just below his left elbow. It resembles one seen in the movie "Captain America: The Winter Soldier."

It's that forward looking mindset that has a lot of people pulling for Dowdy. His co-workers chose him to throw out the ceremonial first pitch at Saturday's game against the Mariners.

"I haven't thrown a baseball since Little League," he laughed. "When I was still in a wheelchair, they told me about throwing out the pitch. I didn't know how I could do it. So I started pushing myself. It gave me a goal."

Saturday, he'll walk out on the field, with friends, family and co-workers in the stands. He wants it to send a message to others.

"No matter what you're going through, get back up and keep moving forward," he said.

He is thankful that he's right handed, so he can control the ball. Recently, he was able to dance, however slowly, with his wife at a friend's wedding.

The driver who hit him was under-insured, and his own insurance policy didn't include that coverage. The family is still dealing with large medical bills. A GoFundMe account has been set up to help with expenses.