LOS ANGELES -- Taylor Swift made history at the 2019 American Music Awards on Sunday, shattering Michael Jackson's record for all-time AMA wins on the same night she was named Artist of the Decade.

Heading into the show, the "You Need to Calm Down" singer had racked up an impressive 23 career wins, putting her one trophy behind Michael Jackson's record 24 all-time wins. She needed one win to tie Jackson's record and two wins to set her own new record. (Country act Alabama also has a total of 23 wins under their belt.)

Early in the telecast, Swift beat out Billie Eilish and Ariana Grande for Favorite Album - Pop/Rock for "Lover." In the final moments of the show, she was also named Artist of the Year.

"The last year of my life has had some of the most amazing times and also some of the hardest things I've gone through...and a lot of them are things that haven't been public," Swift said as she accepted Artist of the Year. "I wanted to thank you so much for being the thing that has been a constant in my life."

Swift said she has recently felt like her "stock is either up or down and people either like you or they don't...but the people who hang in there for you are the ones that you will never forget," thanking "the fans who have hung in there for 15 years of me doing this."

"Thank you for being there and for caring," she said.

Swift was nominated in a total of five categories, only two of which were announced during the show. It was revealed after the telecast that Swift had also won Favorite Music Video, Favorite Female Artist (Pop/Rock) and Favorite Artist (Adult Contemporary). Click here to see a full list of 2019 American Music Awards winners and nominees.

Including her Artist of the Decade honor, Swift now has a total of 29 American Music Awards under her belt.

Swift, who has won more American Music Awards than any other act in the 2010s, was also crowned the Artist of the Decade during the show. Legendary singer-songwriter Carole King, who presented the honor, said Swift's "lyrics resonate across the generations, her songs touch everyone and her impact around the world is extraordinary."

"The past decade has been incredible for this brilliant artist, and the best is yet to come," King added.

Swift said as she accepted the honor: "All any of the artists, or really anyone, in this room wants is to create something that will last...The fact that this is an award that celebrates a decade of hard work and of art, and of fun and memories -- all that matters to me is the memories that I have had with you guys, with you the fans, over the years. We've had fun, incredible, exhilarating, extraordinary times together. May it continue."

A video montage highlighted Swift's achievements on the charts, on tour and in business, and she performed a medley of her greatest hits that included appearances by Camila Cabello, Halsey, Misty Copeland and Craig Hall.

Swift had previously claimed in a Nov. 15 social media post that her planned performance at the show was put in jeopardy by Scott Borchetta and Scooter Braun, the owners of her master recordings. The two sides appeared to have worked out their differences following a series of conflicting reports in the days leading up to the show.

Swift won her first American Music Award in 2008 for Favorite Female Artist - Country. She's also been honored at various times in the pop, rock and adult contemporary genres for favorite song, album and tour in addition to her Artist of the Year wins and a 2015 Dick Clark Award For Excellence.

In 2018, Swift became the most decorated woman in American Music Awards history. She also set a new record for most Artist of the Year wins, which she won for the fifth time in 2019.

Here's a look at the 29 American Music Awards Swift has won through 2019: 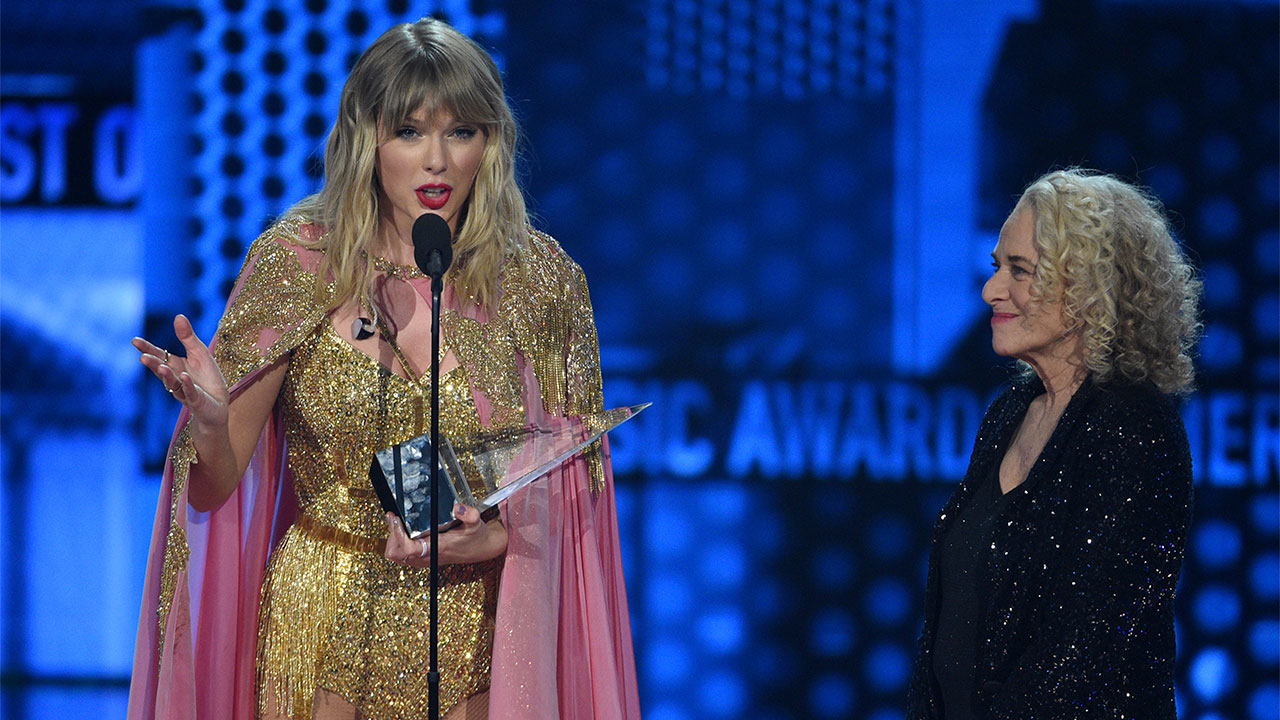 What to know about the American Music Awards: How to watch the AMAs on ABC

Everything to know about the 2022 AMAs