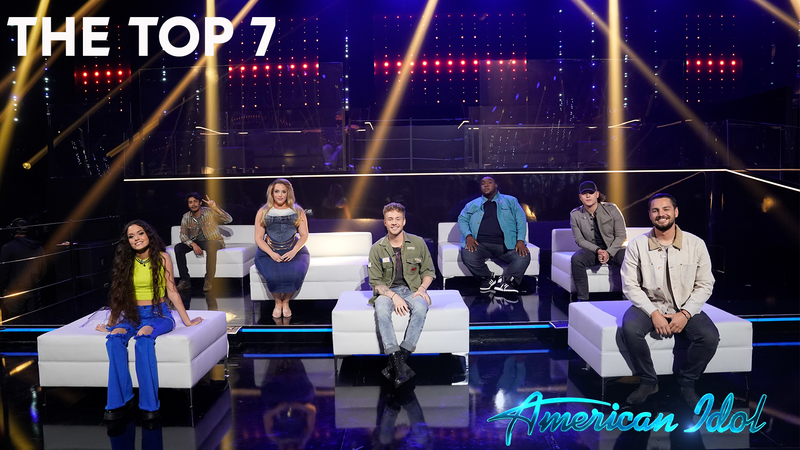 NEW YORK -- The top 7 on America Idol performed music from the Coldplay songbook and a dedication song for Mother's Day as they competed live coast-to-coast for a spot in the top 5.

The two-hour episode featured Coldplay singer Chris Martin serving as a mentor to the 7 contestants. The band also performed their new song "Higher Power" for the first time. The song dropped last Friday.

The youngest contestant opened the show with a song that Chris Martin said was a lot like her, "Paradise."

"It was great to see you let loose in the middle of that song," Katy Perry said. "I want more tornado, but that was perfect!"

Casey returned in the second hour with a rockin' rendition of Alanis Morissette's "Ironic" that had all three judges and her mom dancing.

"I will remember this day forever," he said, and then took the stage to perform his own magic.

The heavy machine operator from Apple Valley, California did not disappoint.

"You have a signature voice," Lionel Richie said. "Enjoy the ride."

"You have that Chris Martin magic," Katy Perry added.

For his Mother's Day song, Chayce Beckham chose his own music and a song called "Momma."

"You had me crying," Lionel said. "Put that song out now."

"My mom has your vote," Katy said.

RELATED: Visit AmericanIdol.com/auditions to learn how you can be next season's American Idol!

Willie Spence said he has some insecurities and that's why he chose "Yellow" for his Coldplay song.

Willie has a voice that is just perfect for this song, which Lionel Richie recognized.

"When an artist who performed the song, who wrote the song, says to you, 'you are owning that song yourself,'' you are taking his song and turning it into Willie's song. That was a religious experience," he said.

Later in the show, Willie's mom was left in tears after his second performance of the night, "You Are So Beautiful."

Caleb said it was hard for him to pick a Coldplay song because he never listened to the band. He opened jamming "Violet Hill" but then seemed to lose his edge.

"Your first 20 seconds of that, you looked like you were ready to overthrow the galaxy of music," Luke Bryan said.

Caleb seemed a lot more comfortable when he performed the second original song of the night, "Mama Said."

The comeback kid, Arthur Gunn, took his turn by changing the melody to "In My Place."

While he won kudos for his artistry, Katy advised maybe he should consider "playing along" once in a while.

He took on Lynyrd Skynyrd's "Simple Man" for the Mother's Day dedication.

The judges seemed less impressed with this performance, although they did agree he picked the right song for his voice.

Grace Kinstler
Coldplay: "Fix You"
Mother's Day: "When We Were Young" (Adele)

Chris Martin helped Grace Kinstler navigate a decision between two Coldplay songs. Grace at first wanted to perform "Hymn for the Weekend" but Chris didn't think the song was right for her voice.

They landed on "Fix You" as he encouraged her to go 'super vulnerable.'

She hit every note and had the judges on their feet at the end.

"Your vulnerability is your strength and people resonate with that. It was awesome," Katy Perry said.

"It was amazing," Luke Bryan added, saying he almost said a bad word on TV it was so good.

She returned later in the show to perform one of her mom's favorite songs, "When We Were Young" by Adele.

Hunter sang "Everglow" for his Coldplay song. He seemed to struggle to hit some notes, but also seemed relaxed.

The software developer from Tennessee had the honor of closing out the show with an original song called "The River."

The audience voted during the live two-hour broadcast. Ryan Seacrest said the vote was really tight!

Next Sunday the contestants will be mentored by Finneas as America will vote who advances to the Top 3!

📝 Your 𝐓𝐎𝐏 𝟓 get mentored by @finneas! 📝

We also learned the search for next season's Idol has already begun. Visit AmericanIdol.com/auditions to learn more.