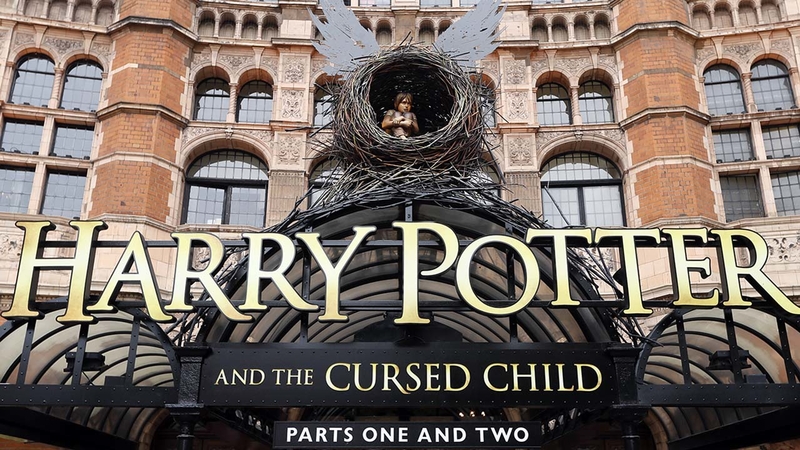 This is the first time a play has made the top 20 best-sellers list.

Rowling's bestseller also tops the lists for both the Most Gifted and Most Wished For book of the year, confirming that Harry Potter continues to be a favorite for readers across genres.

The best-selling book lists are first editions published in 2016, including both print and Kindle purchases.

To see the full top 100 list of Amazon's best-selling print and Kindle books of 2016, go here.

Chris Schluep, Amazon senior book editor, said, "The power of Potter is still strong, and readers of all ages can't get enough of Hogwarts. 'Harry Potter and the Cursed Child' was the most anticipated book of the year, breaking pre-order records months before its release."

1. "Harry Potter and the Cursed Child, Parts 1 & 2, Special Rehearsal Edition Script" by J.K. Rowling, Jack Thorne and John Tiffany
2. "When Breath Becomes Air" by Paul Kalanithi
3. "The Whistler" by John Grisham
4. "The Last Mile" (Amos Decker series) by David Baldacci
5. "Killing the Rising Sun: How America Vanquished World War II Japan" by Bill O'Reilly and Martin Dugard
6. "Hillbilly Elegy: A Memoir of a Family and Culture in Crisis" by J.D. Vance
7. "Truly Madly Guilty" by Liane Moriarty
8. "Night School: A Jack Reacher Novel" by Lee Child
9. "The Black Widow: Book 16 of Gabriel Allon Series" by Daniel Silva
10. "Diary of a Wimpy Kid # 11: Double Down" by Jeff Kinney
11. "15th Affair (Women's Murder Club)" by James Patterson and Maxine Paetro
12. "Before the Fall" by Noah Hawley
13. "Fool Me Once" by Harlan Coben
14. "Crisis of Character: A White House Secret Service Officer Discloses His Firsthand Experience with Hillary, Bill, and How They Operate" by Gary J. Byrne
15. "The Wrong Side of Goodbye: A Harry Bosch Novel" by Michael Connelly
16. "The Magnolia Story" by Chip Gaines and Joanna Gaines
17. "The Nest" by Cynthia D'Aprix Sweeney
18. "One with You: Book 5 of A Crossfire Series" by Sylvia Day
19. "The Obsession" by Nora Roberts
20. "Everything We Keep" by Kerry Lonsdale

The top 20 best-selling Kids & Teens books of 2016 overall are:
1. "Harry Potter and the Cursed Child, Parts 1 & 2, Special Rehearsal Edition Script" by J.K. Rowling, Jack Thorne and John Tiffany
2. "Diary of a Wimpy Kid # 11: Double Down" by Jeff Kinney
3. "The Trials of Apollo, Book 1: The Hidden Oracle" by Rick Riordan
4. "Fantastic Beasts and Where to Find Them: The Original Screenplay" by J.K. Rowling
5. "Magnus Chase and the Gods of Asgard, Book 2: The Hammer of Thor" by Rick Riordan
6. "The Last Star: The Final Book of The 5th Wave" by Rick Yancey
7. "Harry Potter and the Chamber of Secrets: The Illustrated Edition (Harry Potter, Book 2)" by J.K. Rowling and Jim Kay
8. "The Crown (The Selection)" by Kiera Cass
9. "Empire of Storms: Book 5 of Throne Of Glass Series" by Sarah J. Maas
10. "Lady Midnight: Book 1 of The Dark Artifices" by Cassandra Clare
11. "Take Heart, My Child: A Mother's Dream" by Ainsley Earhardt and Kathryn Cristaldi
12. "Glass Sword (Red Queen)" by Victoria Aveyard
13. "Ghosts" by Raina Telgemeier
14. "A Court of Mist and Fury: Book 2 of A Court of Thorns and Roses" by Sarah J. Maas
15. "Gravity Falls: Journal 3" by Alex Hirsch and Rob Renzetti
16. "Calamity (The Reckoners)" by Brandon Sanderson
17. "Give Please a Chance" by Bill O'Reilly and James Patterson
18. "Pax" by Sara Pennypacker and Jon Klassen
19. "The Thank You Book (An Elephant and Piggie Book)" by Mo Willems
20. "Broken Prince: Book 2 of The Royals Series" by Erin Watt