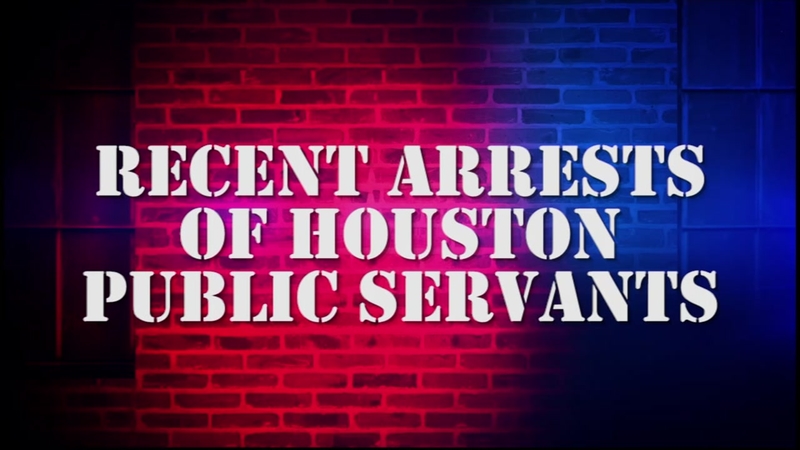 HOUSTON, Texas (KTRK) -- Multiple public service agencies in southeast Texas are dealing with one of their own workers being accused of bad behavior.

Since late last week alone, allegations have been revealed regarding cases ranging from driving while intoxicated to child sex assault.

Here are details on the accused public servants:

Gebert is accused of driving while intoxicated while in uniform and behind the wheel of his police cruiser. Gebert is a 16-year veteran of Pearland police and was once named officer of the year for the department's traffic division.

Gebert is on administrative leave pending the investigation.

The Pearland Police Department confirms to Eyewitness News that Officer Michael Gebert was charged with DWI.

Magana was arrested at his home last Friday night, accused of assaulting a family member.

The school district police department said any action taken in regards to Magana, who is a sergeant, will be "in accordance with Pasadena ISD board policy."

A Pasadena ISD Police officer is accused of assaulting a family member.

The 27-year-old is accused of sexually assaulting an underage girl he met online.

According to an investigation, Ramirez allegedly chatted with the victim over the course of several weeks. Some of the messages, photos, and video of himself sent to the girl were sexually explicit in nature, investigators allege.

A Houston Firefighter is accused of sexually assaulting a teen girl.

The 42-year-old Tennard is accused having a sexual relationship with a Manvel Junior High student that has gone on for about a year.

Tennard has been placed on administrative leave by Alvin ISD.

Officer Marcus Ryans was charged with DWI on Dec. 18. Records show a passerby saw a person asleep at the wheel in the 8000 block of South Loop East.

When police showed up around 12:30 a.m., they allegedly found Ryans asleep in his personal car in a moving lane of traffic.

A veteran Houston Police Officer is on paid leave, after being arrested for allegedly driving under the influence.