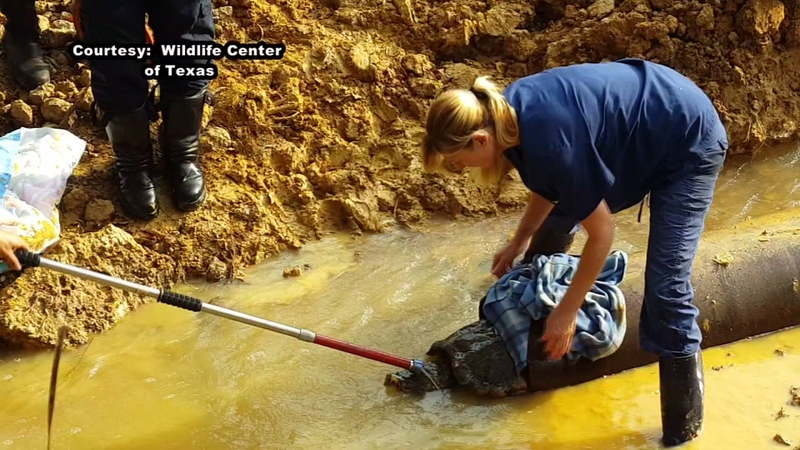 HOCKLEY, TX -- A resident out exploring found a turtle in trouble, and he brought help to save the threatened animal. The man was exploring anew development near Hockley when he discovered a large turtle wedged in the end of a pipe sitting in a waterway, and called Houston SPCA's Wildlife Center of Texas.

When the Houston SPCA rescue team arrived, they determined the animal was a threatened alligator snapping turtle. The pipe was dented at the opening, preventing the turtle from passing through. He struggled to keep his head up as water rushed over his body.

The Rosehill Fire Department was called to assist and provide equipment to open the pipe. Although the Jaws of Life could not cut the thick conduit, the spreader widened the pipe enough to enable Dr. Hoggard, veterinarian Houston SPCA, to free the 53-pound turtle. After the turtle was freed, experts found several more deceased alligator snapping turtles and other animals that had been trapped by the blockage.

The surviving alligator snapping turtle was transported on Houston SPCA's 24-hr injured animal rescue ambulance to the Wildlife Center of Texas where he will be medically evaluated and treated.

Houston SPCA's Wildlife Center of Texas is currently rehabilitating one other alligator snapping turtle that was transferred to the organization through its partnership with Texas A&M University's College of Veterinary Medicine and Biomedical Sciences. The 38-pound turtle was found under a car in a parking lot in Bryan-College Station. He had an embedded fish hook and had been stabbed in the top of the head; markings indicate someone had tried to sever his head and both of his front legs. He is currently undergoing rehabilitation at the Houston SPCA's Wildlife Center of Texas.

Alligator snapping turtles have dinosaur-like characteristics with their spiky shells and primitive-looking faces. They are native to Houston and are one of the few protected freshwater turtles in Texas. The last one the wildlife center admitted in 2013 was the first one recorded in Harris County in over four decades. The state has designated them as threatened with extinction so once the compromised alligator snapping turtles have healed, Houston SPCA's Wildlife Center of Texas will work with Texas Parks and Wildlife to release them both in a suitable habitat.
Related topics:
spcaanimal rescuetexas newsanimalanimal news
ANIMAL RESCUE
Wis. hunters set tangled bucks free instead of killing them: VIDEO
VIDEO: Sea lion gets help after somehow making its way onto freeway
Dog buried in snow, rescued after being swept away in avalanche
Protect your furry friends before the freeze
TOP STORIES
Driver plows into hydrant, leading to NW Houston main break
2 shot, 1 hit in head during home invasion on Houston's East End
High school student attacked in his family's driveway in Richmond
Louie Anderson, Emmy-winning comedian, dies at 68
Bundle up! Clear and cold night ahead
Amber Alert: 14-year-old from Austin area missing since Jan. 15
Man arrested and charged in N. Loop DWI crash that killed passenger
Show More
New ERCOT dashboards let Texans check energy supply in real-time
Meat Loaf, 'Bat Out of Hell' rock superstar, dies at 74
Man killed in suspected road rage shooting on North Belt
Baby, 3 others freeze to death in alleged border smuggling near border
'General Hospital' says goodbye to Luke Spencer
More TOP STORIES News