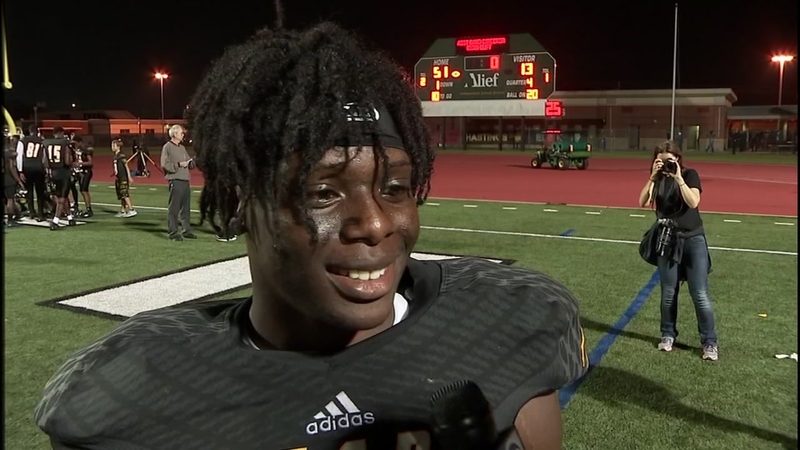 Separated by just a football field, Alief Hastings and Alief Elsik love supporting each other in their endeavors.

Except on Friday night.

The Hastings Bears took down the Elsik Rams, 51-13, in the 40th edition of the Southwest Classic.

Hastings wasted no time getting on the board as Javon Williams hit Joseph Manjack for a quick touchdown.

After the Rams responded with a 31-yard touchdown catch, Hastings dominated the rest of the first half on both sides of the ball, with Williams on offense and Jevon Leon on defense.

Williams would connect with Manjack two more times before the half to take a 34-6 lead into the locker room.

It was more of the same in the second half, with Hastings adding to their rivalry win column and the perfect start to homecoming.

"The rivalry and the competition, I love it," said Hastings quarterback Javon Williams, who missed the last two games due to injury. "I just feel good to be back. We came in as a team and showed off."

Hastings is now 3-1 on the season and 1-0 in district, as they prepare to face the George Ranch Longhorns next week.

Meanwhile, the Elsik Rams remain winless on the season at 0-4 and face a brutal match up against powerhouse Strake Jesuit next week.

A brotherhood of international joy is growing on the football field at Alief Hastings High School.

Adversity makes student stronger on and off the field.

From the days of bringing in extra bleachers into the stands at Crump Stadium, the Southwest Rivalry is sure to produce plenty of highlights and fireworks, making it an easy decision to be our Game of the Week.

Elsik HS students are doing anything they can to help the next generation.

For the Synder's, their love is unbreakable...except on gamedays.

SEASON SUMMARY
ELSIK: It's been a rough start for the Rams. After getting blown out by the Spring Lions to start the season, Elsik gave up back-to-back 60-point games to the Oak Ridge War Eagles and Shadow Creek Sharks.

Unfortunately, it doesn't get any easier for Elsik. After facing Hastings, they take on powerhouse programs Strake Jesuit and Pearland to continue district play before facing a winnable match up against Brazoswood.

HASTINGS: Could this be the year for the Bears? Dickinson took down Hastings in the playoffs last season, but with 13 returning starters and a district title run under their belts, these Bears are ready for another district championship and more.

The Bears have already defeated the Jersey Village Falcons and the Fort Bend Kempner Cougars, but they also fell to Cy Falls in Week 2.

Week 5 of ABC13's Game of the Week takes us Alief for the Southwest Classic for the rivalry between Elsik and Hastings.