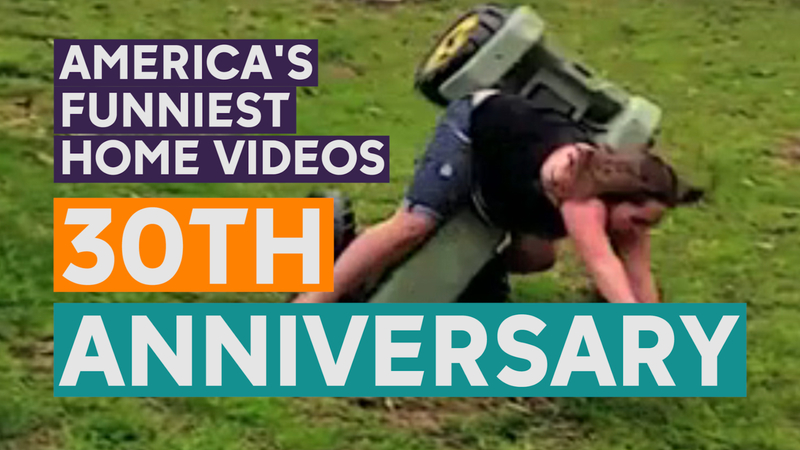 NEW YORK -- AFV - America's Funniest Videos - has been making America laugh for 30 years! In honor of the show's 30th Anniversary, ABC is airing "AFV: America This is You!"

Current host Alfonso Ribeiro took some time to talk about just what makes this show such an important part of TV history.

"It's pretty awesome - 30 years of this show making people laugh - that's a lot of crotch hits over the years," said Ribiero.

The special also checks in with former hosts Tom Bergeron of "Dancing with the Stars" and everyone's favorite "Full House" and "Fuller House" dad, Bob Saget. Ribeiro says that he owes this hosting gig to Bergeron who recommended him for the job when he decided to stop hosting.

"Tom Bergeron, who I think is the best host on television, literally went to ABC and said he thought I would be the best person in his mind to follow in his footsteps," said Ribiero.

Everyone has their favorites over the years, but for Ribeiro, his favorite are the "epic fails."

As the years have gone by, technology has grown leaps and bounds. Gone are the days of VHS. Today, viewers with funny clips to submit do so via the AFV website and also by their AFV app.

"People can send their videos to us by attaching it from their phones and send it right to us," said Ribiero. "So we are getting a lot more videos these days."

The 30th Celebration episode airing this Sunday, you'll be able to go back in time to see 30 years of hilarious videos and meet some of the folks who were in them.

Don't miss an all-new episode of "AFV" at 7 p.m. EST, followed by "AFV: America, This is You!" at 8 p.m. EST on ABC.
Report a correction or typo
Related topics:
arts & entertainmentnew york citymanhattancomedyentertainmentabc primetimeabcoriginals
Copyright © 2022 KTRK-TV. All Rights Reserved.
ABC PRIMETIME
Tensions escalate over shrimp among the women on 'The Bachelor'
'Promised Land' explores American dream with diverse cast
Comedian wields gavel of justice on 'Judge Steve Harvey'
Will 'The Bachelor' Clayton take a rose back?
TOP STORIES
Daylight shows home destroyed after standoff with shooting suspect
What we know about man accused of shooting 3 HPD officers
Clouds clearing today, sunny through the weekend with rain next week
5 people charged in connection with Pct. 5 corporal's murder
How many times can I reuse my N95 mask?
Decades after TV anchor disappears, convicted rapist denies connection
Driver dies after slamming into 18-wheeler's trailer on US-59
Show More
Woman shot in the shoulder during robbery set up in SW Houston
Prepare for a major closure at I-69 and 610 West Loop this weekend
Officers escort body of corporal killed in ambush to funeral home
ABC13 obtains HPD scanner traffic of chase that led to shootout
'Tiger King' Joe Exotic resentenced to 21 years in prison
More TOP STORIES News