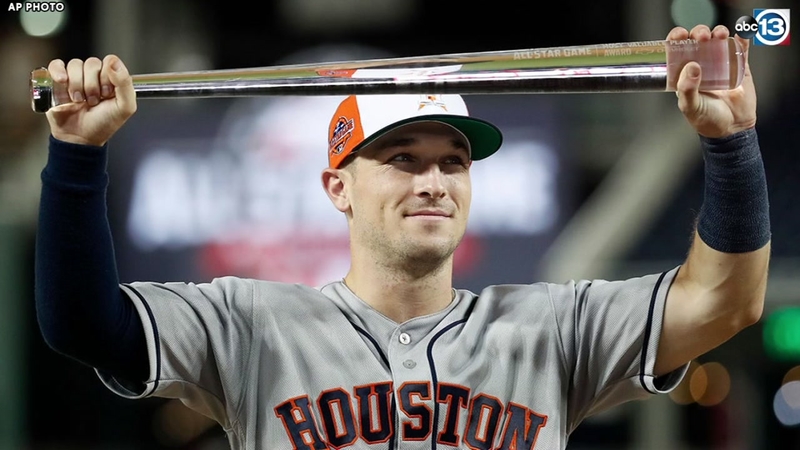 HOUSTON, Texas (KTRK) -- While Major League Baseball will have to wait until after the postseason to award the best players of the regular season, some of the Houston Astros already learned of their honors a day after the 2018 campaign ended.

The Houston Chapter of the Baseball Writers Association of America announced the award winners of the 2018 season.

While Alex Bregman emerged in the American League MVP award conversation, there was no question that the third baseman was the man for the Astros. Houston baseball writers named him the Astros MVP of 2018.

On the hill, the team's clear cut ace of the pitching rotation, Justin Verlander, earned baseball writer's Astros Pitcher of the Year.

In his 14th season, Verlander boasted a 16-9 record while posting a career-high in strikeouts in a season with 290 over 34 starts. Verlander is also in the AL Cy Young Award conversation.

Max Stassi was leaned on as a dependable offensive force at catcher. In his first full season with Houston, Stassi earned baseball writer's Astros Rookie of the Year.

While Charlie Morton is all business on the mound, the right-handed starting pitcher became one of the faces of the team. Baseball writers selected Morton for the Darryl Kile Good Guy Award as the most affable with teammates, fans and the press.

And to make sure every part of the game is recognized, Houston baseball writers selected longtime Astros groundskeeper Willie Berry with the Fred Hartman Long and Meritous Service to Baseball Award. According to the team, Berry started working for the Astros as a janitor inside the Astrodome in the early 1970s. He has worked for more than 45 years, and he's earned his stripes for his "meticulous maintenance of the Astros pitcher's mound."
Report a correction or typo
Related topics:
sportshoustonmlbhouston astros
Copyright © 2022 KTRK-TV. All Rights Reserved.
TOP STORIES
Is Texas missing out? Oklahoma cashes in on booming marijuana market
Teen shot in gunbattle between 2 groups in west Harris County
Constellation Field has more than Cracker Jacks for fans to enjoy
Line for sold-out concert stretched across Houston's north side
Elections Administrator GOP on upcoming election result delays
Harris County DA demands Hidalgo stop 'daily public misstatements'
Woman claimed self-defense in deadly Clear Lake marina shooting
Show More
Houston shelters feeling impact of baby formula shortage
Here's how many inches of rain you could get over the next 7 days
Galveston woman Turns to Ted after flood insurance issues
Oklahoma legislature passes abortion ban, heads to governor
Prairie View's 'Freedom Park' will send anti-racist message
More TOP STORIES News