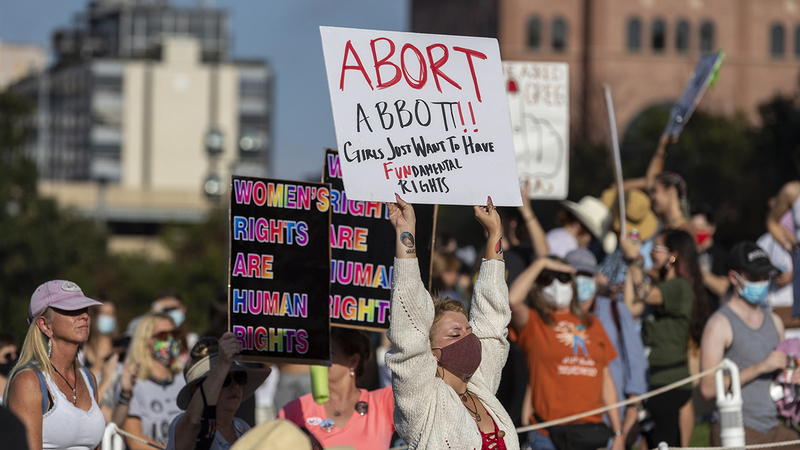 Video above is from Wednesday's previous ruling to suspend the new abortion law.

Abortion providers in Texas had been bracing for the 5th U.S. Court of Appeals to act quickly, even as they booked new appointments and reopened their doors during a brief reprieve from the law known as Senate Bill 8, which bans abortions once cardiac activity is detected, usually around six weeks.

On Wednesday, U.S. District Judge Robert Pitman, an appointee of President Barack Obama, issued an order suspending the Texas law that he called an "offensive deprivation" of the constitutional right to an abortion. It came in response to a lawsuit filed by the Biden administration, which warned that other GOP-controlled states could rush to adopt similar measures.

But the New Orleans-based appeals court quickly granted Texas' request to set aside Pitman's order for now while the case is reviewed. It ordered the Justice Department to respond by Tuesday.

Texas had roughly two dozen abortion clinics before the law took effect Sept. 1, and not all Texas abortion providers resumed services while it was on hold. Many physicians had feared a swift reversal from the appeals court that risked putting them back in legal jeopardy.

The new law threatens Texas abortion providers with lawsuits from private citizens, who are entitled to collect at least $10,000 in damages if successful. That novel approach is the reason why courts had not blocked the law prior to Pitman's ruling, since the state plays no role in enforcing the restrictions.

A representative from the Center for Reproductive Rights issued the following response to the decision:

"The Supreme Court needs to step in and stop this madness. It's unconscionable that the Fifth Circuit stayed such a well-reasoned decision that allowed constitutionally protected services to return in Texas. Patients are being thrown back into a state of chaos and fear, and this cruel law is falling hardest on those who already face discriminatory obstacles in health care, especially Black Indigenous, and other people of color, undocumented immigrants, young people, those struggling to make ends meet, and those in rural areas. The courts have an obligation to block laws that violate fundamental rights."