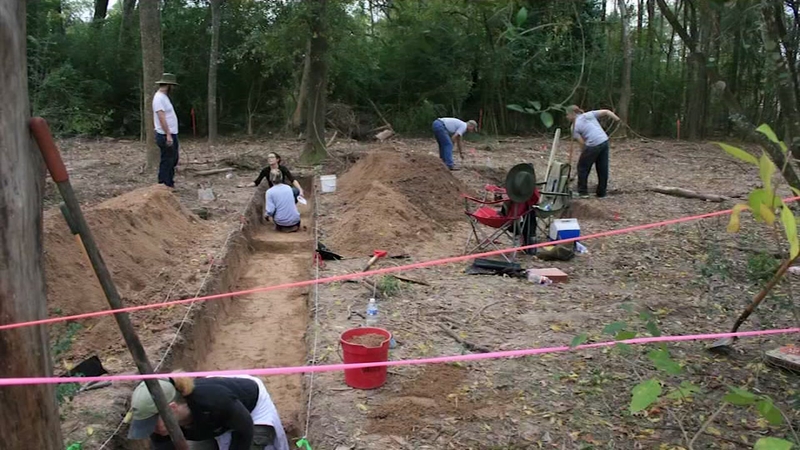 CYPRESS, TX (KTRK) -- There's a cemetery in a small patch of woods in the new subdivision Alden Woods near Cypress for the Texans who owned some land there in the mid-1850s.

"It was all right around there," said developer, Steve Sellers, pointing at an area of land surrounded by $500,000 homes.

But the Harris County Historical Commission says it's not all those one time farmers now buried here owned.

"They had slaves," said Janet Wagner, chair of the Harris County Historical Commission. "Some had two, some had five."

Neighbors say there's always been a rumor those slaves were buried on the other side of what is fast becoming Alden Woods, Cypress' newest subdivision spreading along 70 acres of once-wooded land.

"We had always heard there were slave graves there," said Debra Becker, a neighbor.

Neighbors told a University of Houston archaeologist about it two years ago when he was exploring the white cemetery for the Harris County Historical Commission.
They led him to where they thought the graves were.

"I saw depressions that generally have a generally East/West orientation," said UH professor Ken Brown. "In several cases, groups of them which suggests family type plots within a cemetery."

Wagner, the chair of the county historical commission was there too, and while she told us she couldn't rule out buried trash piles, she said also thought she may be looking at "a potential grave-site for African Americans."

An assistant Harris County attorney was there that day, too.

Texas regulations and laws will recognize cemeteries if you can find depressions in the ground, fencing, some kinds of trees -- but the easiest way and the most reliable sign is tombstones.

And slaves couldn't afford those.

The county attorney's office got a legally binding agreement to protect the white cemetery. But the potential African-American graves on the other side of the subdivision?

In a December email the county attorney's office told abc13 that there were "oral hearsay reports ... of the possible existence of a separate African-American burial ground (which were) never confirmed with historical, documentary or physical evidence."

The county attorney's office, though, was working with the developer to preserve the white landowners cemetery, but neither that office, nor the historical commission ever said anything to the developer about the possible African American graves.

And neither asked Brown to dig.

Instead, the appointed historian and taxpayer-funded assistant county attorney asked Brown -- a volunteer -- to get a sworn statement from a neighbor that there were graves on the land.

Neighbors either couldn't or wouldn't.

"I am not sure what more could have been done," Wagner said. "We thought we'd done everything that could be done."

But neither the Harris County Attorney's Office, nor the Historical Commission even informed the developer of the possibility of African American graves or the depressions seen on a portion of the land in 2013. When we interviewed the developer in January 2016, Steve Sellers told abc13, "You're the first guy to tell me that."

And while Sellers admits he heard rumors years ago, he chalked it up to neighbors upset about a new subdivision in their backyards.

"Like I said, it's all news to me." Sellers said. "If the county attorney had said there's a problem here we would have dealt with It just like we dealt with the other one (the landowners cemetery)."

The professor, with four decades of experience in seeking out African American cemeteries, is concerned, though.

"They're building over cemeteries," he said. "It's a huge double standard.

In a statement, the Harris County Attorney's Office said that no one has ever asked them to do anything or submitted records to determine the location of the possible African American burial site.

The statement did not mention that their own employee was in the woods looking at the depressions.

As a result of our investigation, the Harris County Attorney's Office concedes it is now taking action. In a statement, the office told abc13, "Based on the information reported to us by Channel 13, we are working with the developer to take steps to ascertain whether such location is in fact a grave site. The Office of the Harris County Attorney has been active in protecting historical cemeteries and we will continue to take appropriate action to preserve burial sites in Harris County."