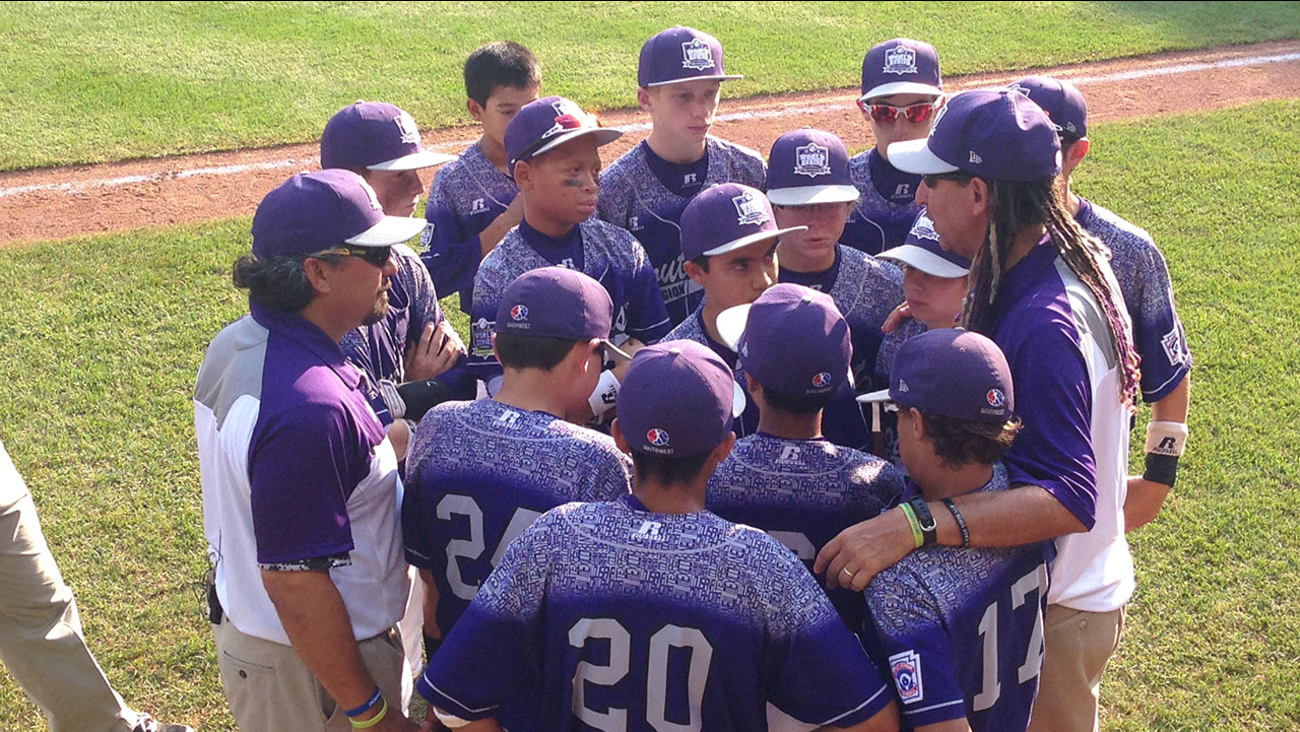 WILLIAMSPORT, PA (KTRK) -- In the battle for the US Championship banner Pearland came in outnumbered. A Little League record crowd of 45,716 mostly Pennsylvania fans gave the Red Land Little League All Stars a standing ovation as the team took the field for warmups. On the field Pearland had to turn to Ryan Farmer to start on the mound. Farmer who typically catches was replaced behind the plate by Tristan Schwehr.

Lewisberry's starting pitcher Cole Wagner looked to be well rested in the first by racking up 3 strike outs on 16 pitches.

With one out in the top of the 1st Lewisberry's Cole Wagner took a 1-1 pitch over the left field wall to give Lewisberry the early 1-0 lead. Farmer then settled down getting the next two batters out on just 3 pitches.

In the 2nd Lewisberry's Wagner gave up his first hit of the day, a double to Zack Mack who took a 2-2 pitch to the left field wall.

Tristan Schwehr then hit a single up the middle to give Pearland runners at the corners with no one out.

Wagner then struck out Marco Gutierrez. Pearland then scored when Tristan Schwehr stole second and a mishandled throw from the Lewisberry catcher allowed pinch runner Raffi Gross to come in from 3rd. A passed ball sent Schwehr to third but 2 more strike outs by Cole ended the inning with the score tied 1-1

In the bottom of the 2nd Lewisberry had no answer for Farmer who kept the hometown team off the board and the hometown crowd quiet -- Lewisberry's Wagner used just 10 pitches to get out of the top of the 3rd recording his 7th and 8th strike along the way.

In the bottom of the 3rd Pearland's Ryan Farmer used just 10 pitches to get Lewisberry down in order.

In the top of the 4th Lewisberry's with one out Wagner after walked Zack Mack on 4 straight pitches and then got Caleb Low to strike out swinging. With two out Marco Gutierrez hit a ground ball to the centerfield wall that Lewisberry's outfielder could not get to cleanly, allowing Zack Mack to score from first. The inning ended with Pearland up 2-1.

In the bottom of the 4th Ryan Farmer gave up just his second hit of the game. It was another solo home run. This time Jaden Henline sent blast to left center to tie the game and bring the 45 thousand fans to their feet.

In the top of the 5th Pearland was kept off the bases and off the board.

Pearland's Ryan Farmer entered the bottom of the 5th having thrown 45 pitches. After getting Lewisberry's Adam Cramer to ground out, Farmer then walked Jake Cubbler.

Farmer battled back, getting pinch Jarrett Wisman to go down swinging on three pitches. Farmer then ended the inning with a strike out of pinch hitter Bailey Wirt. The score tied 2-2.

Wagner then got Ben Gottfried and Jarrett Tadlock to strike out. Lewisberry's manager Tom Peifer then pulled his started who left then game with 11 strike outs having thrown 85 pitches. Jaden Henline then came on to face Zack Mack who had hit a grand slam the night before. There would be no heroics from Mack as Henline got the Pearland 1st baseman to pop up to end the inning.

In the home half of the 6th Farmer walked the lead-off hitter on 4 straight pitches. It ended Farmer's day with 6 strike outs. That brought up Cole Wagner who hit the first home run of the game. Manager Andrew Solomon countered by bringing Marco Gutierrez to the mound.

Wagner would run the count full with a couple of huge swings, but ultimately would go down looking at a called 3rd strike for the first out of the inning.

Jaden Henline then singled the first pitch he saw to center moving Lewisberry's Kolmansberger to third with one out.

That brought up Chayton Kraus who hit the game winning single to right field.

Lewisberry wins 3-2 and moves on the World Series final against Japan.

The loss sends Pearland home, the 2015 team making further than the 2014 Pearland All Stars and tying the effort of the 2010 team.