I-95 traffic pileup in Virginia leaves hundreds of drivers stranded 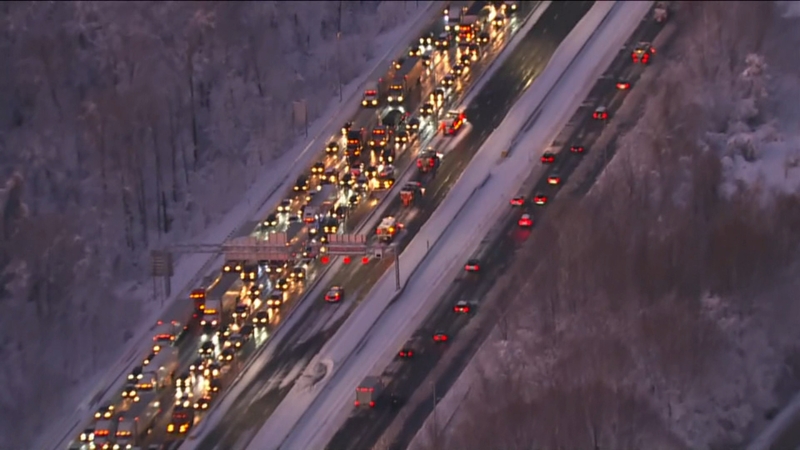 Hundreds of motorists have been stuck in the snow for more than 15 hours along a 50-mile stretch of Interstate 95 after a crash involving six tractor-trailers, authorities said.

The Virginia Department of Transportation confirmed both directions of I-95 remained shut down between Ruther Glen, Virginia, in Caroline County and exit 152 in Dumfries, Prince William County.

The tractor-trailer collision Monday afternoon caused no injuries, but brought traffic to a standstill along the U.S. East Coast's main north-south highway, and it became impossible to move as the snow accumulated.

Hours passed with hundreds of motorists posting increasingly desperate messages on social media about running out of fuel, food and water.

Video shows the icy traffic nightmare unfoldiing on I-95 between Washington, DC and Richmond, Virginia.

The agency said Monday that emergency crews were responding to more than 600 accidents in the winter weather. Compounding the problem, traffic cameras went offline as much of central Virginia lost power in the storm, the agency said. More than 281,000 customers remained without electricity on Tuesday.

"I've never seen anything like it," Emily Clementson, a truck driver, told NBC Washington. She urged stuck motorists to ask truck drivers if they have food or water to share, since many carry extra supplies in case they get stranded.

The agency tweeted to the stranded drivers on Monday that reinforcements were arriving from other states to help get them moving again.

"We wish we had a timetable, ETA or an educated guess on when travel will resume on I-95. It's at a standstill in our area with multiple incidents," the tweet read. "Its frustrating & scary. Please know our crews don't stop. Crews will work 24/7 until ALL state-maintained roads are safe for travel."