Geno Smith feels 'great' after surgery: 'Get ready for me to come back' 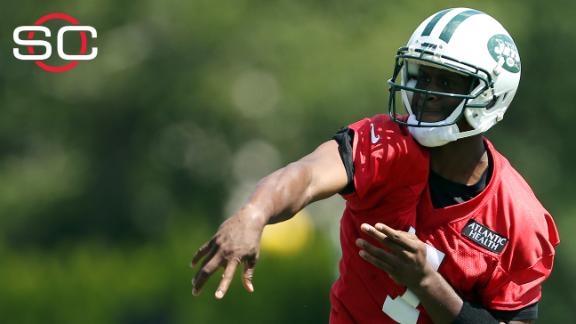 Only a few days removed from a locker room punch that resulted in surgery to repair a fractured jaw, New York Jets quarterback Geno Smith already is throwing and talking about playing again.

"Get ready for me to come back," Smith told the New York Post on Saturday.

The newspaper caught Smith throwing to a friend at his apartment complex near the Jets' training facility in Florham Park, New Jersey. Smith, his cheeks swollen, wasn't wearing a shirt but was wearing eye black.

Smith, who spent a night in the hospital after undergoing surgery Thursday, wasn't at the Jets' facility Saturday, when they returned to training camp after playing their first preseason game.

The Jets say Smith will be sidelined six to 10 weeks after getting cold-cocked by then-teammate IK Enemkpali in the locker room last Tuesday. Enemkpali was immediately released by the Jets and claimed on waivers by the Buffalo Bills.

It was described as a "sucker punch" by Jets coach Todd Bowles, but Smith may have provoked Enemkpali by sticking a finger in his face, according to sources.

They were arguing over $600 that Smith owed Enemkpali -- traveling expenses to attend Enemkpali's football camp last month. Enemkpali laid out the money, but Smith wasn't able to attend and promised to repay him.

Smith declined to discuss the incident in a brief interview with the Post. He threatened to call the police if the reporters didn't leave the "private property."

Meanwhile, veteran Ryan Fitzpatrick has stepped into the starting quarterback role. It's his job to lose, raising questions about Smith's long-term future with the team.

Enemkpali already has debuted with the Bills. After Friday night's game, he said a number of former teammates have called to wish him well.

"They called to see how I'm doing and called to check on me," he said.