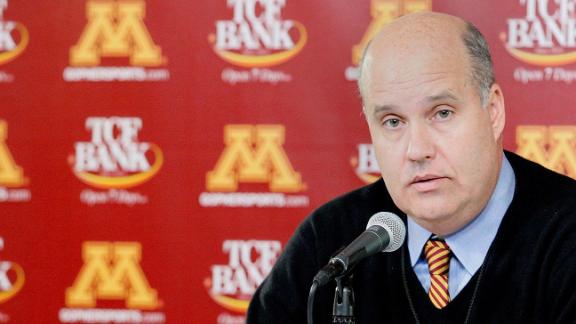 MINNEAPOLIS -- Two women who were sexually harassed by the University of Minnesota's former athletic director Norwood Teague came forward Thursday, blaming Teague for details about their identities starting to spill out and calling his behavior toward them "frightening and wrong."

Erin Dady and Ann Aronson, both high-level administrators at the school, said in a statement issued by the university that they had intended to keep their identities confidential, but say Teague sent an email to colleagues about when the incident happened, making it easy for their identities to be discovered. Both women requested privacy after stepping forward.

Teague was accused of groping the women and making lewd and inappropriate comments in text messages at an unspecified event.

"We felt compelled to report Teague's behavior because it was frightening and wrong," they said in the statement.

After Teague's surprise resignation last week, their identities were kept private in reports that spelled out the athletic director's actions. The university took pains to conceal any information -- including the date and other circumstances of the event where the behavior occurred that could lead to identifying the women.

But Dady and Aronson said they revealed their identities Thursday in part because Teague sent an email "inside and outside the U of M community" noting the event was a school senior leadership retreat. Aronson is deputy chief of staff to President Eric Kaler, and Dady is a special assistant to Kaler.

"With only a dozen women having attended the retreat, our identities have been rumored and speculated about," they wrote in the joint statement.

A call to Teague's cellphone went to voicemail, which was full. A message to his work email account was not immediately returned.

A copy of Teague's email provided to The Associated Press by the university was addressed to "Friends and Family," with Teague referencing the retreat "several weeks ago." The email was time-stamped Aug. 7, less than an hour before the university's news conference announcing his resignation.

Teague read a statement the day of his resignation in which he blamed alcohol for his behavior at the event and vowed to seek treatment after apologizing for harassing the women.

"Having too much to drink does not excuse it," they wrote. "In sharing our story today, we hope to make it easier for those who experience sexual harassment to come forward."

University officials are launching an investigation into the athletic department.

In a statement Thursday, Kaler said he applauded "the courageousness of Ann and Erin in this very difficult situation."

"They have placed their own personal privacy at risk to prevent this from happening to others. They and anyone who bravely faced sexual harassment and assault should be supported and considered role models by all of us."