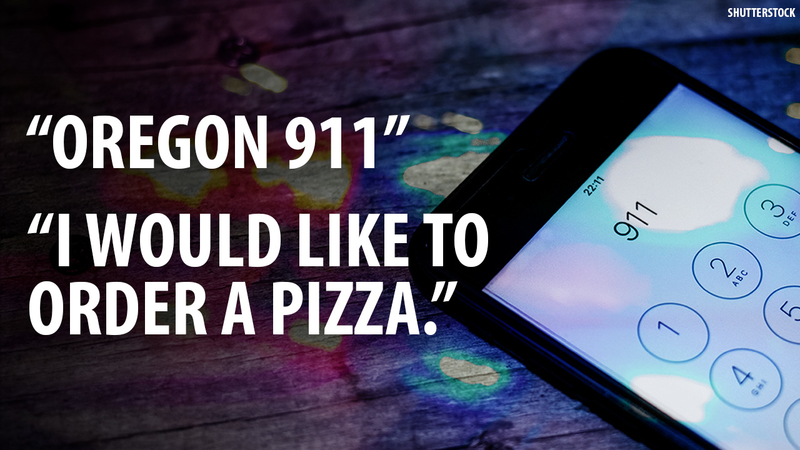 OREGON, Ohio -- A victim's daughter called 911 to "order a pizza" as a clever way to covertly alert police of an alleged domestic violence situation.

The woman told WTVG that she called 911 because a man was hitting her mom but used this tactic so he couldn't plan to run away from police.

"This is the wrong number to call for a pizza," Teneyck said.

"No no no. You're not understanding me," the woman responded.

Teneyck said he's answered many domestic violence calls in his 14 years of service but this one was out of the ordinary.

"You see it on Facebook, but it's not something that anybody has ever been trained for. We're just trained to listen," he said.

Yet he said his intuition soon kicked in.

"Is the other guy still there?" he asked.

"Yep. I need a large pizza," the caller responded.

"Alright. How about medical. You need medical?" he said.

"No. With pepperoni," she said.

Police soon arrived at the scene and the man, Simon Lopez, was arrested and charged.

Oregon Police Chief Michael Navarre said in his 42 years of service, he's never heard anyone use a pizza order as code to indicate domestic violence but coming up with code in this sort of situation was the right thing to do.

"Somehow or another, convey to that police dispatcher that you are in trouble, and this woman did that. She did that not with her words, but with the tone of her voice," he said.
Report a correction or typo
Related topics:
ohio911 callu.s. & worlddomestic violence
Copyright © 2022 KTRK-TV. All Rights Reserved.
TOP STORIES
Weather Alert Day: Storms pounding much of Houston area
Missing Alvin ISD employee who 'had deep secrets' found safe
Hidalgo to release data on gun-related homicides ahead of NRA meeting
Ready to cast your ballot? 50 primary races headed to runoffs
Heard rests case at libel trial without calling Depp
Travis Scott faces new lawsuit, but it's unrelated to Astroworld Fest
Endangered sea turtle nest found on Galveston Island State Park
Show More
Young Thug rap lyrics used as alleged evidence in RICO indictment
Man found shot to death near homeless camp, HPD says
Baylor to relocate statue of slave-owning former university president
California parents could soon sue for social media addiction
Family hasn't returned home since 12-year-old shot while asleep
More TOP STORIES News