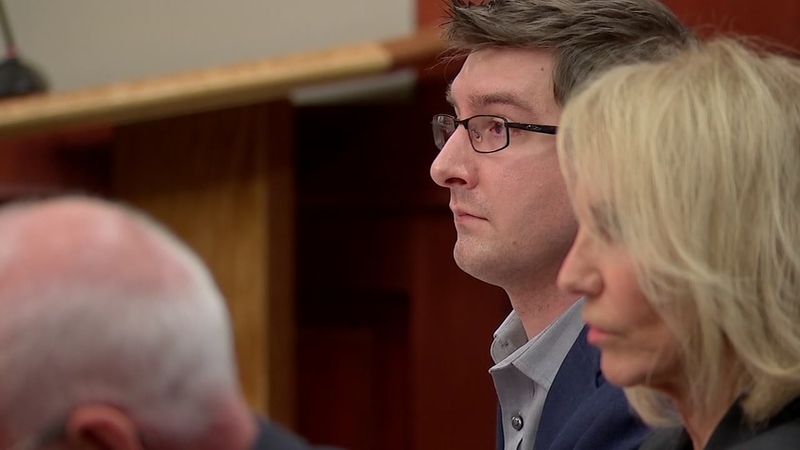 FORT BEND COUNTY, TX (KTRK) -- It was a graphic description played for a jury in a Fort Bend County court room.

"I don't know what's wrong with her but she's drowning in her own blood."

That's one of the first things Daniel Politte said to dispatchers after calling 911 on March 11, 2014. He asked for an ambulance to be sent to the Missouri City home he shared with his wife, Stephanie Politte. He said she was vomiting blood.

"We are in the bedroom, in what looks like a murder scene," Politte said when asked where they were in the home.

Prosecutors say it was a murder scene, and that Dan Politte pulled the trigger.

"(She) was lying in her bed, maybe even asleep, face down on the pillow as she was shot in the back of the head," said Fort Bend County Assistant District Attorney Amanda Bolin.

Dan Politte never mentions a gun or a gunshot wound during the nearly 15-minute phone call to 911, which was played in Judge Maggie Jaramillo's court as testimony began on Wednesday at the Fort Bend County Justice Center.

Before help arrived, dispatchers guided him through CPR and mouth-to-mouth, not knowing his wife had been mortally wounded. In the audio you can hear Stephanie Politte struggling to breathe.

Prosecutors say you can also hear Dan Politte making highly unusual statements, such as saying how gross the blood was, or how beautiful his wife was.

"Hey! You know, you're so pretty. Very pretty. You're a very pretty girl," he said during that 911 call.

Police quickly began looking at Politte as the prime suspect in his wife's murder. Officers said as they spoke with him that night his demeanor ranged from calm, to joking, to crying and screaming.

Stephanie Politte was 29 years old, a beloved teacher at the Monarch Institute, helping kids with autism.

The defense claims she struggled with depression and was drunk at the time of her death, with three times the legal limit for alcohol in her system.

Dan Politte's attorneys say the couple wrestled over a gun that night, and that she somehow was shot in the back of the head.

"This was tragic. It is an accident; something nobody can bring back. Nothing that they have proves that this was not an accident," attorney Katherine Scardino said.