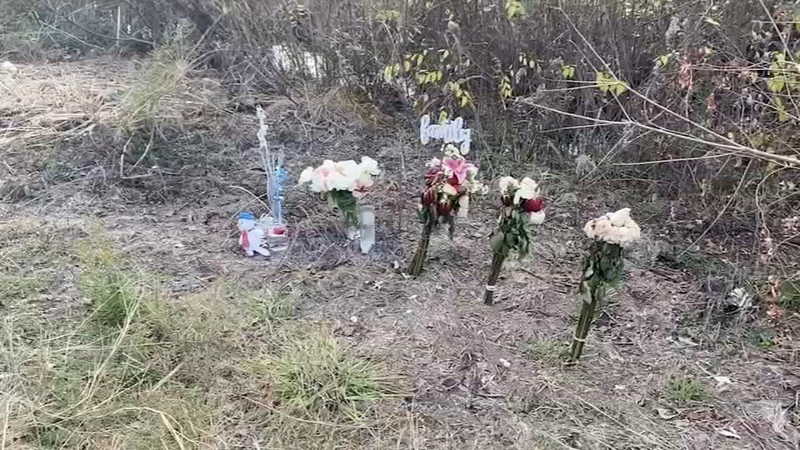 HOUSTON, Texas (KTRK) -- Loved ones held a private viewing for Alexis Sharkey on Friday in Pennsylvania. Close friends described the viewing for the Instagram sensation as intimate, emotional and difficult.

Ally Cale shared video from inside the viewing. It showed candles lit in front of pictures of their beloved friend. Christmas lights adorned the table with a portrait of Alexis on display. Cale told ABC13 they're simultaneously grieving and searching for justice.

"We're trying to figure out what this new normal is for us without her being here," said Cale. "It was something that Lexi ... I feel like would have been proud of. Just how everyone came together, how close and intimate it was."

Cale said friends and family were able to see Sharkey one last time at the viewing. She said Alexis' family plans on having a big memorial next year.

With questions surrounding her cause of death, friends of Alexis explained the family had their reasons for leaving her husband out of their celebration of her life.

Cale said there was a delay in getting Alexis' body home to Pennsylvania over next-of-kin issues. The Harris County Medical Examiner would not confirm details of any dispute, referring us to the legal process for releasing a body. Records initially showed Alexis' husband as next-of-kin. They now show her parents.

"Her family didn't invite him. They didn't want him there. That's why it was kept so secret, so he wouldn't get word about what was going on," said Cale.

Eyewitness News reached out again to Tom Sharkey for comment. So far, he hasn't responded to our requests.

Reporter Steve Campion spoke with him earlier this month. Sharkey insisted their marriage was happy and strong. He said Alexis' social media portrayal wasn't an accurate depiction. He said she wasn't that happy person seen on Instagram.

Alexis' close friends again told Campion she expressed concerns about her marriage as early as August. She didn't want to be at home and said in text messages the relationship left her with anxiety.

They said that was true at Thanksgiving, just before her disappearance.

ABC13's Steve Campion spoke with the Houston influencer's mother, husband and friends. Here's what they all had to say about her death.

"She didn't want to be home on Thanksgiving. She wanted to be anywhere else but home," said Cale. "Her friend opened up her home to her. She said you can have Thanksgiving with us. You're more than welcome to come over."

Cale said friends now believe the last time anyone heard from Alexis Sharkey was on Friday, Nov. 27. She sent a casual message on Instagram at 6:30 p.m. to a friend. They said she was at her Houston apartment watching movies.

Sharkey's body was discovered the next morning, just a short drive from the complex.

Close friends told ABC13 they filed a missing person's report for Alexis Sharkey, not knowing she had already been found lifeless. They said the pending investigation has left them worried about their safety and eager for action.

"It's the fact that we have nothing. It's been almost a month now. My biggest fear from the beginning because of how big Houston is and how there aren't a ton of police officers compared to the population ... is that this was going to get swept under the rug," said Cale. "It hurts my heart that she felt like she couldn't talk to us sooner because maybe this could have been prevented. We could have done a little bit more."

John Richardson works as a supervisor in the City of Houston's Solid Waste Department. He said the Thanksgiving holiday pushed back service to the weekend, which is why a garbage truck driver was picking up in the area of Red Haw Street.

Richardson spoke out to Campion about the disturbing discovery.

"(The employee) called me and said, 'Man, I think see a body but I'm for not sure, or a mannequin or something,'" said Richardson. "He really didn't know because he didn't stop."

Richardson told the employee to continue his pickups and that he'd go out to look for himself with a co-worker. Richardson soon discovered the naked body of Alexis Sharkey.

"So we're looking and we see feet. The feet were in the road," said Richardson. "Man, I'm just devastated. I'm looking at a human being lying there dead. It kind of shook me up a bit. We can't help her. We can't bring her back."

RELATED: Woman found dead on side of road in west Houston

Richardson told Campion he can't stop thinking about the horrible situation. He called the find bizarre, and said Sharkey wasn't wearing a single piece of clothing. She looked like someone delicately placed her in the brush along the road.

Richardson is convinced someone is responsible.

"She kind of was in the fetal position ... in the way that the body was laid. I think somebody actually laid her there. They didn't just throw her out," said Richardson. "It's just a mystery at this moment. I hope they find out who did it and bring justice ... so that at least the family and friends can be at ease."

Richardson said he didn't see any visible injuries or wounds to the body.

A Houston public works employee reported finding a naked woman's body on the side of the road over the weekend. Sadly, police confirm it is Alexis Sharkey, who went missing after Thanksgiving.

Houston police have released few details about the death investigation. They haven't even publicly said if foul play is suspected in the case. A spokesperson with HPD told ABC13 today their homicide detectives consider this an active and ongoing investigation.

The Harris County Medical Examiner's Office told us a cause of death is still pending. That uncertainty leaves Alexis Sharkey's friends feeling like they're in limbo, entering a somber holiday season.

"I know that they're taking it seriously and are working on her case. That's their job," said Cale. "I trust they're doing their job."