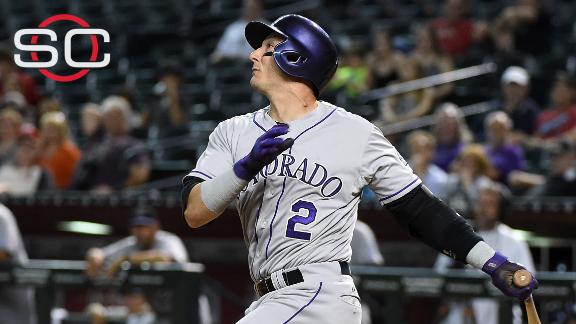 TORONTO -- It appeared the Toronto Blue Jays needed to add starting pitching to help their playoff push. Instead, they traded for a star shortstop.

Blue Jays general manager Alex Anthopoulos said acquiring five-time All-Star Troy Tulowitzki from the Colorado Rockies was "the rare chance that one of the best at his position was available."

"We're getting the best shortstop in baseball in our minds," Anthopoulos said. "We're just thrilled."

Toronto (50-50) began the night tied for second in the AL East, seven games behind the New York Yankees. The Blue Jays lead baseball with 528 runs but their starters have a 4.38 ERA, third worst in the AL.

"Getting better doesn't have to mean a reliever or a starter," Anthopoulos said. "When you have a chance to get the best player at a respective position and a guy that also brings some intangibles as well, it's a rare opportunity and we wanted to take advantage of it."

Toronto has not reached the playoffs since winning the 1993 World Series -- the longest drought of any major league team.

"We're within striking distance," outfielder Jose Bautista said. "We have a chance to make something special happen this year."

Asked whether Tulowitzki's offensive and defensive contributions would be enough to end Toronto's postseason skid without an upgrade to the rotation, Anthopoulos said he couldn't answer until after Friday's non-waiver trade deadline.

"You can save that one for Friday," he said. "Hopefully, we're not having that discussion."

Hawkins, who has already announced his intention to retire at the end of the season, takes Reyes' spot on the roster for Tuesday's game against Philadelphia.

"It's always good to be in a place where you're in playoff contention," Hawkins said. "We weren't that in Colorado so this is definitely an upgrade."

Tulowitzki had yet to arrive in Toronto and will be added to the roster Wednesday.

Tulowitzki was owed about $105 million as part of the $157.75 million he was due from the Rockies over 10 years through 2020. Until the trade, he had spent his entire 10-year MLB career with Colorado, and was still struggling with news of the deal when Anthopoulos spoke to him in the visiting manager's office at Wrigley Field on Monday night.

"I told him we're excited," Anthoupoulos said. "I said 'I know your head is spinning,' and he said 'Yeah.' I think he was just in shock."

Blue Jays All-Star third Josh Donaldson said the players will work to help Tulowitzki adjust to a new team in a new country, and a new league.

"It's our job to make him feel comfortable and feel at home," Donaldson said.

"Middle of the order bats at shortstop really don't come around too often," Anthopoulos said.

Manager John Gibbons said he hadn't decided how to arrange his lineup following the departure of leadoff man Reyes, but was excited about what Tulowitzki would bring.

The Blue Jays could have drafted Tulowitzki in 2005, when Anthopoulos was the team's scouting director.

"I got to see him then, and he was obviously a great player," Anthopoulos said.

Toronto used the sixth pick on left-hander Ricky Romero, allowing Colorado to take Tulowitzki seventh. An AL All-Star in 2011, Romero was demoted to the minors in 2013 before being released in April 2015.

Staying healthy has been a challenge for Tulowitzki, who has spent time on the disabled list with a quadriceps tendon tear, lacerated right hand, broken left wrist and a groin injury. Last season, he played in 91 games before having hip surgery.

Anthopoulos insisted he's "very comfortable" with Tulowitzki's health and wasn't concerned about his new shortstop playing home games on one of the two artificial turf surfaces still in use.

Reyes joined Toronto in a 10-player trade with Miami in November 2013, but was shelved by injuries in each of his three seasons with the Blue Jays. Anthopoulos said Reyes was "sad" about leaving Toronto, where he played alongside fellow Dominican stars Bautista and Edwin Encarnacion.

"I think he enjoyed it here," Anthopoulos said of Reyes. "I don't think anybody wants to get traded, especially when you're happy in a certain place. He was a pro but I think he was sad."

Reyes, a four-time All-Star, is owed more than $56 million on the remainder of a $106 million, six-year contract he received from Miami that runs through 2017 with an option for 2018.

The Blue Jays and Rockies first laid the groundwork for their swap of shortstops with offseason discussions, but the trade "didn't get off the ground," Anthopoulos said. Talks resumed in May and picked up speed in early July before stalling again.

It was the decision to include Hoffman, Toronto's first-round pick in 2015, which helped seal the deal.