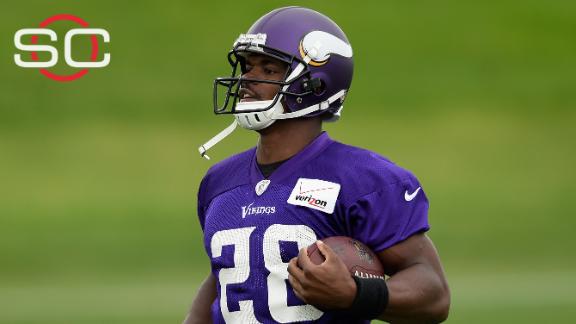 PALESTINE, Texas -- A thin, nearly transparent banner welcomed Minnesota Vikings running back Adrian Peterson back to his hometown, with a message he took to heart this year.

"Welcome Home! We Got Your Back!" the banner read, declaring this the ninth annual "Adrian Peterson Day."

The banner was one of the many messages of support for Peterson after a season in which he did not play, having been placed on the commissioner's exempt list after being indicted on charges of child abuse on his then-4-year-old son. Some here at Reagan Park felt Peterson had been unfairly persecuted by those who didn't understand his style of discipline. Some spoke appreciatively of Peterson's efforts in the Palestine community. One woman wanted Peterson's advice for her son, a 13-year-old running back from a nearby town.

Peterson walked past a series of welcome signs with his wife, Ashley -- who is expecting the couple's second child in the fall -- and father, Nelson, to a gazebo laced with Vikings purple. There he addressed a growing crowd of family, friends and locals who watched his remarkable high school career unfold here in east central Texas.

The visit came during a break between Vikings organized team activities and minicamp. Though Peterson hadn't played football in several months, Vikings offensive coordinator Norv Turner told reporters in Minnesota earlier this month that Peterson looked "like he hasn't missed a day."

"It feels good," Peterson said of Turner's words. "Kind of combats what you normally hear from other media sources and people in general: 'He's been out a year, how's he gonna look, this, that, the other.' One of the best offensive minds who ever coached says he never missed a day, it felt good, to be honest. I worked extremely hard. I had a lot of time to keep my body in shape and it showed."

For a time, Peterson had ill feelings about his relationship with the Vikings. He told ESPN.com in February that he felt ambushed by the Vikings working with the NFL to place him on the commissioner's exempt list. Peterson's father has reportedly pinned some of that blame on Kevin Warren, the Vikings' chief operating officer.

"I really haven't had the opportunity to talk to Kevin Warren, but I will,'' Peterson said. "Right now I'm focused on football. I'm focused on controlling the things that I can control.''

Back in February, Peterson also said if it was up to his wife, he would not return to Minnesota. Months removed from that emotional time, and with her husband back with the Vikings, Ashley Peterson admitted she would have liked to be closer to her home in Oklahoma.

"I am happy that he'll be going back," she said, five months pregnant with what she noted is Peterson's sixth child, and with 3-year-old Adrian Peterson Jr. sitting on her lap. "They have supported us. I just would personally, for me, I would've preferred to be closer to home. That's just a personal preference for me. The Vikings have been supportive of him and the fans have been pretty supportive, so we're happy to be going back."

Asked if part of that was about the way her husband's situation was handled by the organization, she said, "Well, the thing is, kind of, but you never know how that would've played out with anyone else. Just kind of have to go with the flow on that. I personally would've preferred to be closer to my family. I'm having a baby and all that."

She felt her husband's intentions were misunderstood in the aftermath of his indictment.

Both of Peterson's parents, aunts, uncles and cousins all contributed to the family reunion air to Saturday's festivities.

"You know, home, man," Peterson said. "So many people here before the fame, that supported me. I remember being at Palestine High School, seeing both sides, home and visitor sides, packed. The people in Palestine supporting me throughout my career. It says a lot.

"The people here, they understand where I come from. They get it. They know me as a person. They know my personality. They know what kind of heart I have because they've been around me my entire life. These are people that actually know me. It feels good to be supported."

While here, Peterson visited with vendors who provided face painting for kids and medical screening for adults. He took photographs with fans and signed autographs. Jackie Carr brought her son, a 13-year-old middle school running back, on a surprise trip from nearby Malakoff, Texas, in hopes that meeting Peterson would inspire him. She asked Peterson to stress the importance of education to her son, and Peterson obliged.

"I know for me, I really, my freshman and sophomore year, I kind of got off track, so I had to pick up the pace and I was able to accomplish ultimately getting my GPA up and passing my ACT and SAT tests to get to Oklahoma," Peterson said. "I try to encourage young kids, make sure to take advantage of those four years."

"He is the best man that I ever met," McNatt said. Adding later, "He shouldn't have went through all that. They just wanted to pick on somebody."