Aaron Rodgers says Packers have talent to get to Super Bowl 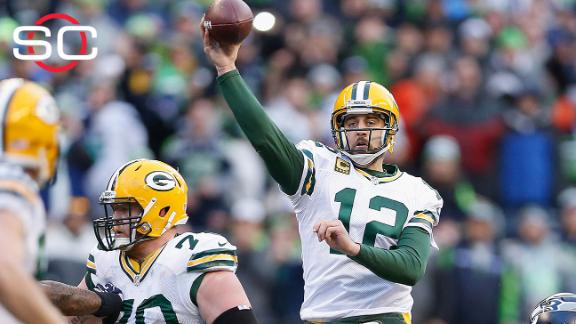 GREEN BAY, Wis. -- Aaron Rodgers has not watched the NFC Championship Game, and considering he has never seen the Green Bay Packers' Super Bowl XLV victory from start to finish, don't expect the MVP quarterback to return to the film room and relive the overtime loss to the Seattle Seahawks.

He doesn't need to see it again to believe his team can get back there.

And why not, considering that Rodgers has his entire starting offense back from last season?

"I think the talent is definitely there," Rodgers said during an interview Tuesday. "But just like last year, you've got to see how the team comes together."

The best examples of that, according to Rodgers, were the Packers' Super Bowl team and last year's edition, despite the collapse at the end.

"When the team really comes together and believes in itself, guys raise their level of play," Rodgers said. "So it will be interesting to see how this team comes together. It's very important that we find a way to jell together the next couple of weeks and into training camp when we get back."

Rodgers is coming off his second NFL MVP in the last four years, but he's stuck on one Super Bowl win.

At age 31 and with five years left on the $110 million contract extension he signed in 2013, there should be ample opportunity.

But what if Rodgers never wins -- or even returns to -- another Super Bowl?

Rodgers said he has no lingering concern about the strained left calf that slowed him late last season and couldn't be happier that general manager Ted Thompson re-signed receiver Randall Cobb and tackle Bryan Bulaga this offseason.

Perhaps what he's most excited about are the up-and-coming players on the roster such as center Corey Linsley, receiver Davante Adams, safety Ha Ha Clinton-Dix and linebacker Sam Barrington.

"I like the young talent," he said. "It's always interesting to see how the guys take the jump from Year 1 to Year 2 and Year 2 to Year 3. We've seen guys in the past make some huge jumps. I'm excited offensively about Corey Linsley in Year 2 after he played so well last year, and Davante after he showed some flashes. He's had a real good offseason, so I'm excited to see what he can do his second year in the offense.

"Defensively, we've got some guys. Ha Ha played real strong for us. Great open-field tackler. Made some plays in the Seattle game, so it will be interesting to see how he does coming back and more comfortable in his role. We've got some young guys in the secondary that we have to assimilate quickly. Sam Barrington, looking for him to make a jump as he gets more playing time and a bigger leadership role. And then you always look at the guys who are coming into contract years because you'd expect them to play pretty well. So it will be interesting to see how those guys respond."