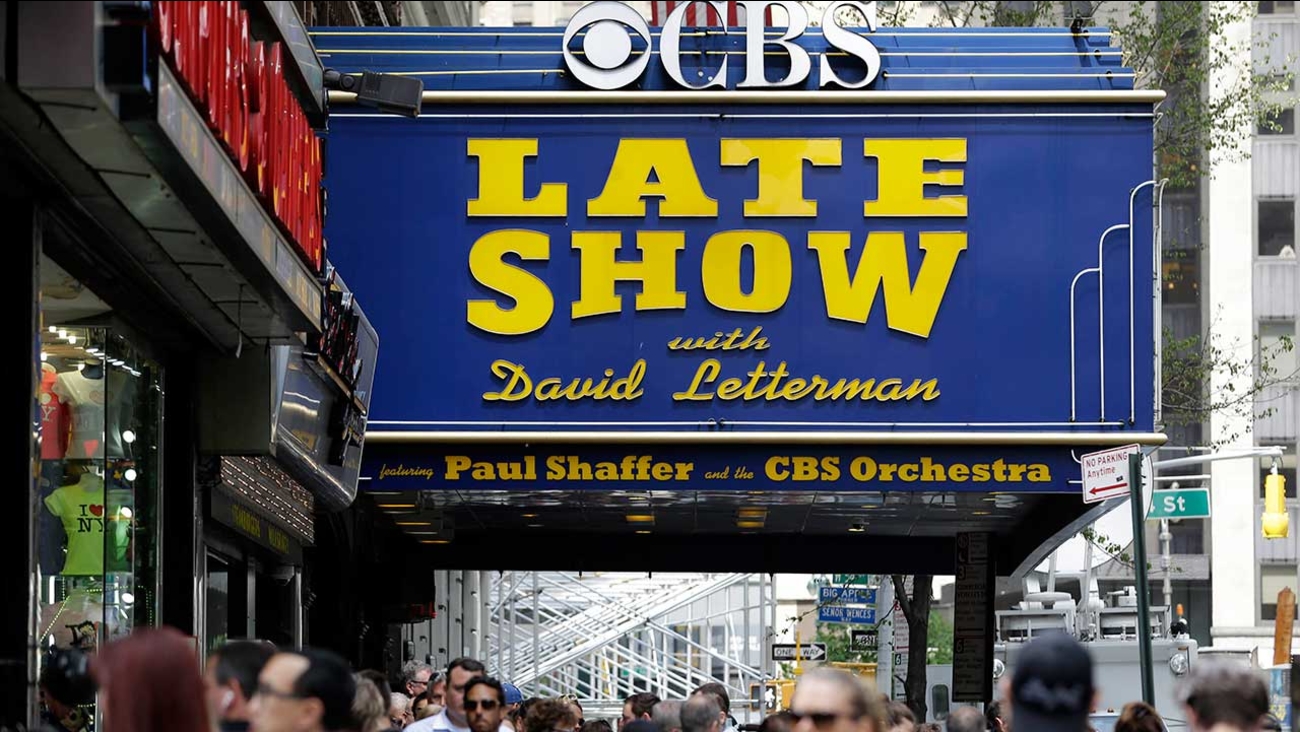 People gather under the marquee of the Ed Sullivan Theater in New York, Wednesday, May 20, 2015. (AP Photo/Seth Wenig)

NEW YORK -- After 33 years and 6,028 broadcasts of his late-night show, David Letterman is signing off.

The transplanted Hoosier, who made Top Ten lists and ironic humor staples of television comedy and influenced a generation of performers, is hosting his final episode of CBS' "Late Show" on Wednesday. Stephen Colbert will replace him in September.

Letterman announced his retirement last year and has kept details of his final show under wraps. The show tapes in late afternoon at Manhattan's Ed Sullivan Theater and airs at 11:35 p.m. Eastern.

His last few weeks have been warmly nostalgic, with Letterman entertaining old friends like Bill Murray, Tom Hanks, George Clooney and Julia Roberts. Anticipating the end, viewers sent Letterman to the top of the late-night ratings the week before last for the first time since Jimmy Fallon took over at NBC's "Tonight" show and they competed with original telecasts.

From his start on NBC's "Late Night" in February 1982, Letterman's comedy was about more than telling jokes. He attached a camera to a monkey's back, tossed watermelons off a roof and wore a suit of Alka-Seltzer to plunge into a tank of water. Celebrities used to being fawned over either clicked with his prickly personality or didn't, and when Cher called him a more profane version of "jerk," it became a memorable moment.

He shifted to CBS in 1993 when NBC gave the "Tonight" show to Jay Leno instead of Letterman, a slight he never forgot or forgave.

The tricks subsided as Letterman mellowed with age and fatherhood. His audience welcomed him back after a heart bypass, listened as he became the first late-night host back on the air after the 2001 terrorist attacks and saw him acknowledge to inappropriately having sex with a subordinate.

As retirement neared, Letterman joked about second thoughts. "Next week I'll be Googling foods that improve prostate health," the 68-year-old host said Tuesday. He also opened his heart: ending a segment with Oprah Winfrey last week, the microphone picked him up saying "I love you" as the two hugged. He shared a lingering last kiss onstage with Roberts.

His penultimate show Tuesday could easily have been the last. Murray, his first guest on both the NBC and CBS shows, appeared after bursting out of a cake, smearing Letterman and those around him with icing. The Top Ten list was "Famous Last Words." Bob Dylan sang the standard "The Night We Called it a Day."

Frequent foil Regis Philbin walked on, and they both expressed their admiration for each other. But not all of the famed Letterman edge had disappeared. He watched as Philbin slowly made his way up the aisle and out of the theater, shaking hands with audience members along the way.

He showed tape of several local CBS affiliate anchors discussing his retirement, misidentifying him as the "Tonight" show host. And he couldn't help but laugh as one anchorwoman said, "I do like him. It's hard to watch his show sometimes."

Rival Jimmy Kimmel paid tribute to Letterman by not making a fresh ABC show on Wednesday, where he usually competes in the same time slot. Fallon paid tribute on "Tonight" on Monday: "I, like every kid who grew up watching him, will miss him."