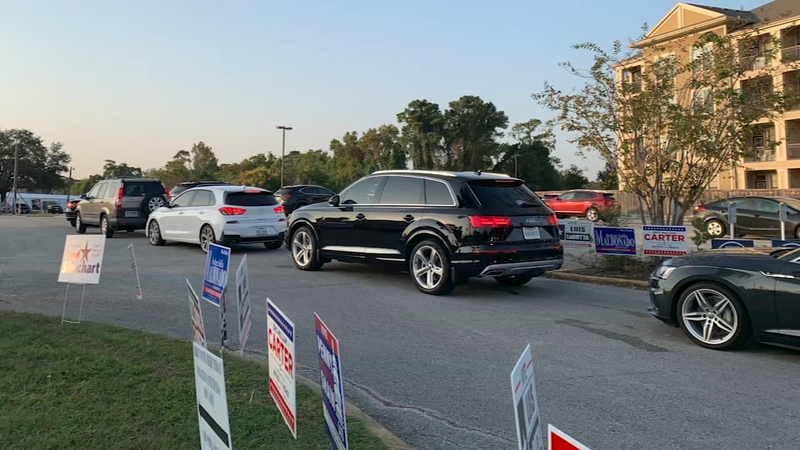 "I went through the drive-thru, total in-and-out (was) 15 minutes," Houston resident Tu Fini said in a Facebook comment. "I have been in Chick-fil-A lines longer than voting today. It was great, organized and fast."

SEE RELATED STORY: What you need to know about drive-thru voting in Harris County

The center is one of 10 drive-thru locations in Harris County. It will continue to serve voters until Election Day on Nov. 3, despite ongoing attempts to shut the sites down.

Drive-thru voting was first implemented by Harris County Clerk Chris Hollins for the July primary runoff elections due to the coronavirus pandemic and has been continued for the November elections.

"My [No. 1] priority is to keep voters and poll workers safe," Hollins said in a July 22 press release. "The feedback we received from the drive-thru voting pilot proves that voters felt safe exercising their right to vote and that it was an easy and efficient alternative to going inside a voting center."

The Texas Republican Party filed a last-minute lawsuit against Hollins' office Oct. 12 to restrict drive-thru and curbside voting to "only those Harris County registered voters who have submitted sworn applications." According to the Texas Secretary of State's Office website, curbside voting is allowed upon request to an election officer.

SEE RELATED: What you need to know before heading to the polls in Texas

The lawsuit was dismissed Oct. 13, and since then, many of the drive-thru sites-each of them also a regular polling site-have seen more drive-thru voters than regular voters.

"Drive-thru voting makes sense to anyone who doesn't want to suppress the voice of the people," said Angelica Luna-Kaufman, communications specialist for the Harris County Democratic Party. "We continue to believe in the importance of making voting as easy and as safe as possible."

However, Luke Twombly, press secretary for the Texas Republican Party, said the party is taking the case to the Texas Supreme Court.

"We filed this case to ensure that no illegal votes would be cast and counted in this election," Twombly said.

Ana Naught, coordinator of the nonprofit initiative Houston in Action, which focuses on increasing civic and political engagement, criticized the lawsuit as an attempt to "confuse voters."

"We're glad the judge was able to see the lawsuit for what it was and let the work of community groups and organizers across the region play out as record-breaking first days of early voting," Naught said.