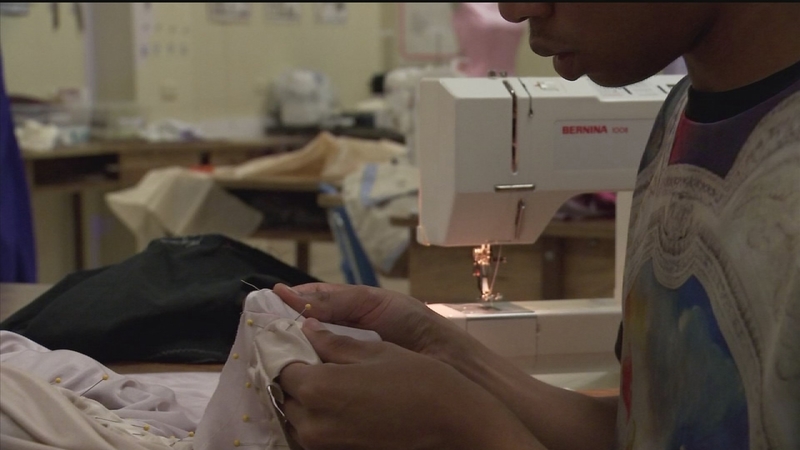 Businesswoman teams up with HS to save art of sewing

HOUSTON (KTRK) -- At Elsik High School in Alief Independent School District, students are learning what has become, among their generation, a lost art: sewing.

Senior Angie Sua's mom is a seamstress, but it didn't interest her, until the school assigned her to this class and she found her gift.

"I guess you can say that I finally found something that I'm really good at, because before this, I really didn't know what to do," said Sua.

This sewing program was on the brink of extinction in 2011 when teacher Abby Rae joined forces with a sewing friend, Rosalind Gaither. The small business owner, who doesn't even have a child in this district, began donating supplies and mentoring.

"I think as a small business it's important to give in your own industry and to support those students who maybe don't have the funds just for some fabric, or some thread, or scissors, or a zipper," said Gaither.
Xavier Prince learned everything he knows about sewing after starting this class just last year.

"This class has given me the extra push to start my own clothing line, and that's actually what I want to do," Prince said.

"It's amazing to see the community step, individuals come in that are giving donations to the school and so on," Rodriguez said. "It's what it really should be like."

The sewing program had about a dozen students 3 years ago, but now it has three times that many and growing. But those numbers aren't the only signs of success. There is also the end-of-the-year fashion show and design competition Gaither suggested to give students a chance to show their work. It was held last Friday.

"I hope they experience a job well done, and after all of their hard work, now we get to celebrate," said Gaither.