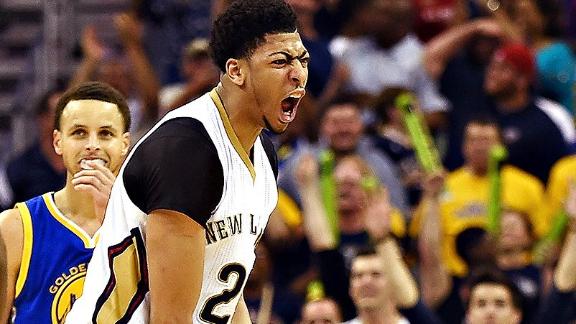 NEW ORLEANS -- Pelicans All-Star Anthony Davis says a Golden State Warriors player told the host team's bench in a spate of trash talk before a 103-100 victoryfor New Orleans that it would be an easy win for the West's No. 1 seed.


"They came out and said it was going to be a scrimmage game," Davis said of the Warriors in a TV interview after the game. "We kind of took that personal."


In the locker room, Davis would not publicly elaborate on who the Warriors player was.


New Orleans trailed in the first half but rallied with a 60-point second half. Davis led the Pelicans with 29 points, 10 rebounds and four blocks.


According to ESPN Stats & Information, it was the 10th time over the past two seasons that Davis had at least that many points, rebounds and blocks in a game. All other NBA players have combined for only 11 such games over that span and none of them have more than two.


"We just tried to come out and play," Davis said. "They said what they said. You try to worry about us and what we're going to do to try to win this game."


When asked who the specific player was, Davis responded, "I don't know who said it."


"We don't want to be this pushover team, guys come in and do whatever they want. That's how we want to look at ourselves,"Davis said of beating the top-seeded Warriors.


The Pelicans are fighting for the eighth and last playoff spot and stand a half-game in front of the Oklahoma City Thunder after Tuesday's games, while the Warriors have clinched the top spot in the Western Conference.


"We feel real good about beating the best team in the NBA," Pelicans coach Monty Williams told reporters after the game. "They played tonight. They didn't rest their guys. They went after it."