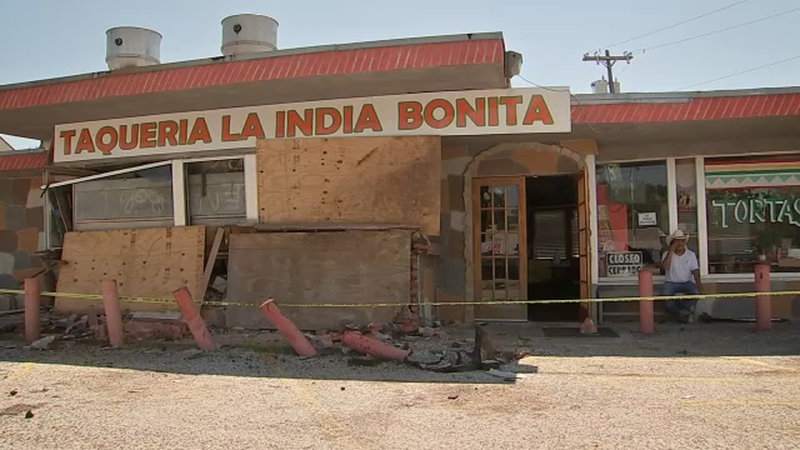 LEAGUE CITY, Texas (KTRK) -- It was known for its barbacoa and its humble beginnings. Earlier this week, it all came to a devastating end with a car crash.

League City's La India Bonita restaurant is boarded up with plywood after someone ran into the building, leaving owner Silverio Guzman and his family with little choice but to close down.

Guzman surveyed what was left of the landmark with ABC13 Photojournalist Anthony Reed.

Guzman spent part of the clean-up process by loading spoiled meat into a trailer, a noxious task compounded by the debris left behind.

Nobody was inside the building when the crash happened, and the driver was believed to be intoxicated, Guzman said.

For now, Guzman and his family don't have plans to reopen the business, which began 20 years ago as a food truck. La India Bonita opened at the Main Street location in July 2000.

Guzman came to the United States in 1982 when he was 17 with little more than the shoes on his feet and a backpack, according to a 2019 story for leaguecity.com.

Food service and hospitality run in the Guzman family. His father ran a restaurant in Mexico with the same name. When Guzman opened his League City location, he wanted to honor his father's legacy by naming it La India Bonita.

Friends and long-time customers say they hope the Guzmans will open the restaurant's door again with the community's help.