Air travel is picking up again but there are changes 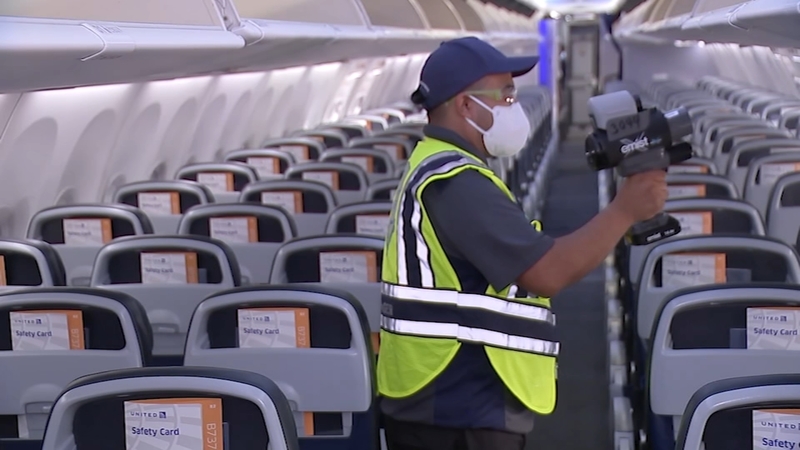 How air travel has changed during the COVID-19 pandemic

HOUSTON, Texas (KTRK) -- For the last week, the Transportation Security Administration has recorded increased travel at airports across the country.

But as the pandemic continues, there are big changes to how we fly.

Both Bush Intercontinental and Hobby Airport are requesting passengers to wear masks in the airport and all major airlines are requiring the practice.

United Airlines announced Thursday that passengers who refuse to wear a mask on its planes will be banned.

"We were the first major US carrier to require this for our flight attendants and our customers," said Jennifer James, the base manager for United Airlines in Houston.

From the moment you walk into the airport, you'll feel the changes.

"If you have checked-in online, your bag tags will be printed for you and you won't have to touch the kiosk," said Kim Kerr, the managing director of customer service for United Airlines at IAH.

In order to reduce touch points and interaction, passengers may scan their own boarding pass. For some international flights, they may use a facial comparison scanner.

"We take a photograph of the passenger. That photograph is compared to a government database, then the person may board the plane," said Augusto Bernal with the Houston Airport System.

The scanners are offered at several international gates at IAH and Hobby.

It's voluntary and officials say the picture is not saved.

It will take longer to board and de-board. Only five rows of people are allowed on and off aircrafts at a time.

"Several powerful fans move the air through the HEPA filter and the air is circulated through the aircraft every two to three minutes," said Robert Rasch, an aircraft mechanic for United Airlines.

United, Southwest and American Airlines are all limiting cabin capacity, but not blocking middle seats.

Delta Airlines is limiting capacity and blocking middle and some aisle seats through September.

United says its trying to cap planes at 70 percent capacity.

A spokesperson tells ABC13 that if a plane is booked over 70 percent, passengers will be notified 24 hours before the flight and at the gate.