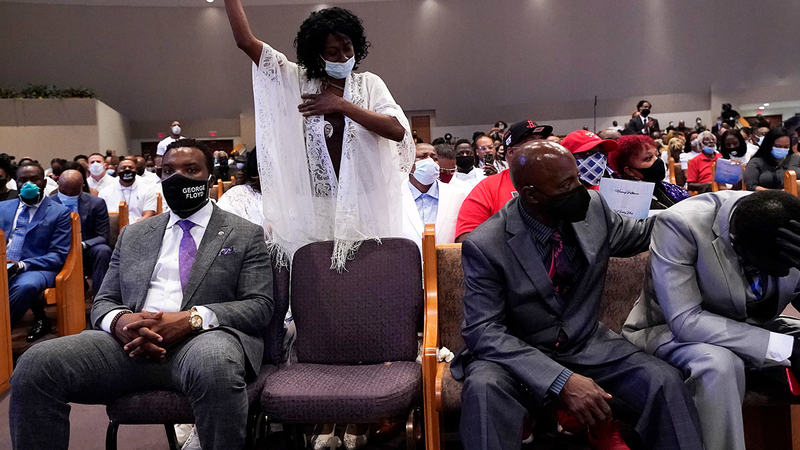 29 of the most moving photos from George Floyd's funeral

HOUSTON, Texas (KTRK) -- While more than 6,300 people walked into The Fountain of Praise church in Houston to pay their respects to George Floyd, the amount of people at his private funeral is greatly reduced.

Ahead of Tuesday's service, the church released a partial list of invited guests, including Vice President Joe Biden and Floyd Mayweather Jr., who committed to paying for the services.

The notable names signified the impact that Floyd's death had on the reinvigorated national conversation over race and police brutality.

As the service got underway, ABC13 found additional people of note in the sanctuary who were not announced before. Those notable figures include:

Former Vice President Joe Biden met with Floyd's family privately on Monday. Biden, who is now the Democratic party's presidential nominee, did not attend Tuesday's funeral service because he now has Secret Service protection and said he did not want to be disruptive. However, a video message offering condolences was played during the service.

Floyd's 6-year-old daughter, Gianna, attended the service as well. Prior to the ceremony, the girl, who doesn't know how her father died, spoke to ABC. She knew only that people were talking about him.

"Dad changed the world," she said during a recent demonstration in Minneapolis.

Roxie Washington, Gianna's mother, said she couldn't bring herself to explain what happened.

"She said, 'I hear them. I hear them saying my daddy's name.' She doesn't know what happened. I told her that her dad died because he couldn't breathe," Washington said during an interview with "Good Morning America."

Gianna arrived at the funeral with Washington and her mother's attorney.

PHOTOS: Remembering George Floyd across Houston as he is laid to rest in his hometown
6238875