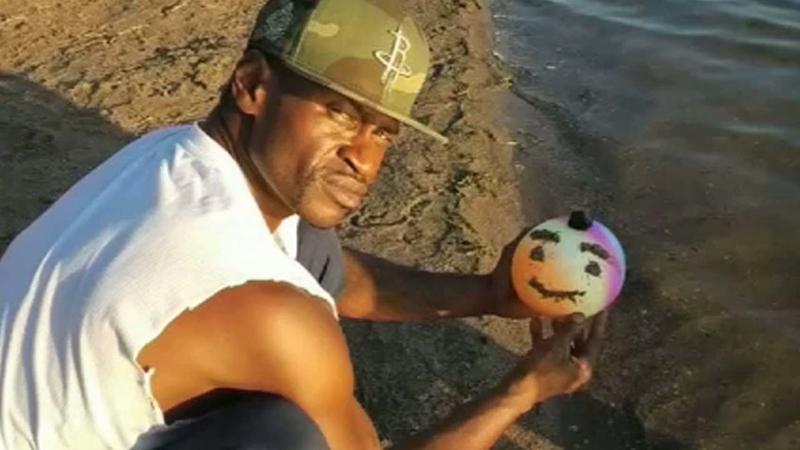 George Floyd, the 46-year-old Houston native who died in Minneapolis police custody, is being remembered as a 'gentle giant' by friends and former classmates.

Floyd was seen on video pleading that he could not breathe as a police officer knelt on his neck during his arrest. The officer kept his knee there for several minutes before Floyd stopped moving.

The video above shows a portion of the confrontation before Floyd's death. Viewer discretion is advised.

The man was known to friends as just Floyd. He grew up in Houston's Third Ward and graduated from Yates High School, where he was a tight end on the football team.

Probably seems like a lifetime ago to Floyd’s family and friends.

Floyd moved to Minneapolis from Houston about four or five years ago looking for better job opportunities and that he was doing well. His boss says his daughter still lives here in Houston, and so do a lot of his friends.

"If anybody knows him, they know he's not a confrontational person. And I'm not just saying this because that happened to him. Anybody who knows him will tell you he's not confrontational," said Floyd's friend Milton Carney.

"You know, if he was here, he would say that he's a man of God. He would stand on that firmly," said Courteney Ross, Floyd's fiancée.

Houston Police Chief Art Acevedo weighed in Wednesday morning on Floyd's arrest and subsequent death, saying it "should be condemned by all in law enforcement and our extended community. His death serves as a stark reminder that when bad policing happens, it disproportionately impacts communities of color and poor communities."

The death of #GeorgeLloyd should be condemned by all in law enforcement and our extended community. His death serves as a stark reminder that when bad policing happens, it disproportionately impacts communities of color and poor communities. This is what players are protesting. pic.twitter.com/keF8HckcdH

Acevedo also said incidents like these are what professional athletes, especially in the NFL, had been protesting. In 2017, multiple players in the league began kneeling during the national anthem, an act that became controversial for some who saw it as disrespect for the American flag. However, those who agreed with the protests said the kneeling was about shining a spotlight on police brutality and inequalities for minorities in America.

About 100 people gathered Tuesday night at Emancipation Park to show their support and their outrage about what happened Monday.

WATCH: Protesters to Minneapolis officers after Houston man dies: 'He begged you for his life'
EMBED More News Videos

The video that was shared online shows the man pleading that he couldn't breathe while bystanders demand the cop move his knee.

The video is tough to watch. On Tuesday, Floyd was identified as the man on the ground. He's seen and heard on video pleading that he can't breathe as a white officer knelt on his neck. That goes on for several minutes, then Floyd appears to stop moving. The officer leaves his knee on Floyd's neck for several more minutes.

Four Minneapolis police officers involved in Floyd's death have been fired. Protesters want to see them charged with murder.

Police initially responded to a 911 call about someone trying to pay with a counterfeit bill at a food store.
More rallies in Houston are being planned.

VIEWER DISCRETION ADVISED: The video that was shared online shows the man pleading that he couldn't breathe while bystanders demand the cop move his knee.

Smoke from tear gas billows across the street from Minneapolis police station.