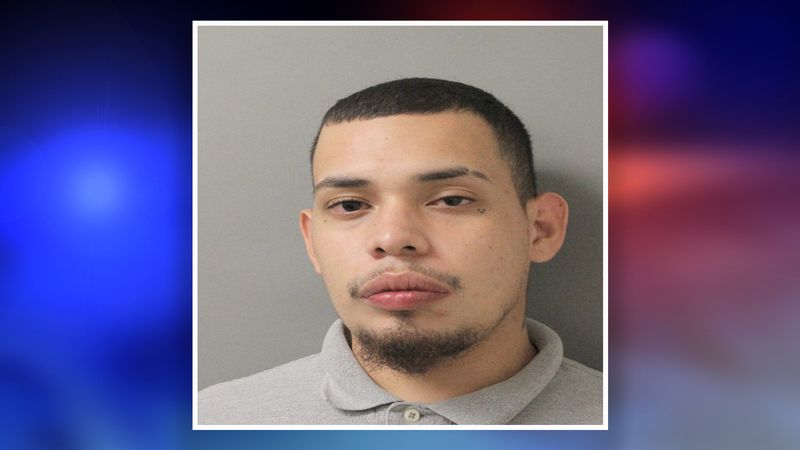 HOUSTON, Texas (KTRK) -- The Houston Police Department is asking for your help in locating a gang member they consider to be dangerous.

Alan Eleizer Reyes, 24, is wanted in seven felony cases, five of which involve a crime spree that began in 2019.

Reyes was charged with two additional felonies for bail jumping.

@houstonpolice is seeking the public's assistance in locating Alan Reyes. Reyes is considered a dangerous gang member and is currently wanted in 5 felony cases in a crime spree that began in 2019. Please contact @CrimeStopHOU w/his whereabouts. See story-->https://t.co/KaER1Ufjrt pic.twitter.com/LK2CMopSgH

The crime spree first began with a confrontation with two males at a nightclub on Little York on January 27, 2019.

In December 2019, police say the suspect was trespassing at an apartment on Blalock when he fired several rounds at an attendant who asked him to leave, narrowly missing him and striking a building.

On April 3, 2020, Reyes had a confrontation with a male affiliated with a rival gang in which he punched and kicked the man and pulled out a handgun, shooting at him 10 times and striking him five times, according to police.

Police say Reyes' street name is "Puppet." He has allegedly eluded police since his initial January 2019 charge, and his whereabouts are unknown.

He is believed to be armed and is considered dangerous. Police noted that in all of his confrontations, he was in possession of a firearm.

Crime Stoppers is offering a reward to anyone who calls in with information on his whereabouts.

In a tweet, Houston police spoke directly to anyone who may be helping Reyes hide.

Who doesn't need extra money right now? The person who calls into @CrimeStopHOU with his whereabouts remains completely anonymous and cashes in up to $5,000. He now has 7 felony warrants. Whoever is letting him hide out at their place, shame on them. That's a felony for you too!! https://t.co/RtlRJSdci7

"Whoever is letting him hide out at their place, shame on them," the tweet read. "That's a felony for you too!!"

Crime Stoppers may pay up to $5,000 for information leading to the charging and/or arrest of the suspect in this case. Information may be reported by calling 713-222-TIPS (8477) or submitted online at www.crime-stoppers.org.
Report a correction or typo
Related topics:
houstonhouston police departmentgang violencegang activitycrime stoppersgang
Copyright © 2021 KTRK-TV. All Rights Reserved.
TOP STORIES
Body found floating in Brays Bayou in SE Houston
Witness says child was walking to bus stop when driver hit her
Scarface gets kidney from son after COVID-related organ failure
Crews searching for Houston woman missing for nearly 2 weeks
1,000 jobs up for grabs and some require no degree or experience
LIVE: Gabby Petito's parents hold news conference as search continues
Trailer of football team for kids 4-12 taken after it was used once
Show More
Power outages linger for some, days after Hurricane Nicholas
Mom files complaint against 8th grader after son's fight at school
How Nicholas will impact Houston's weather again Thursday
How Houston's East End came to be
Bialik, Jennings to guest-host 'Jeopardy!' for rest of year
More TOP STORIES News