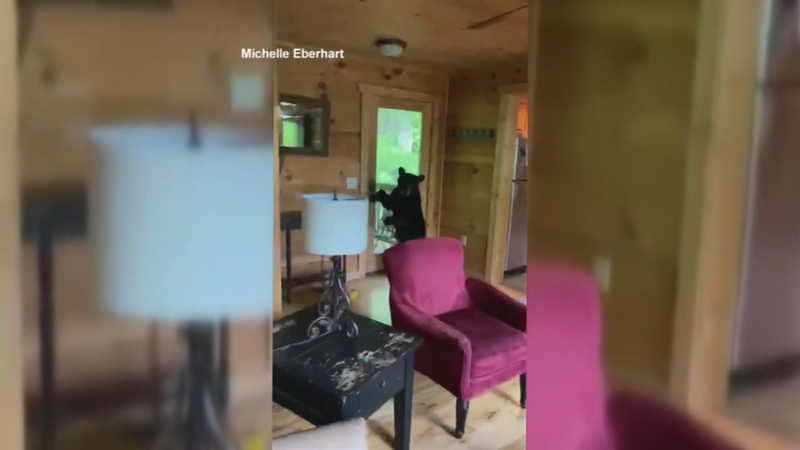 GATLINBURG, Tenn. -- Two friends on vacation in Gatlinburg had a close encounter with a black bear when it forced its way into their rental cabin.

Michelle Eberhart came to Gatlinburg to enjoy a weekend with her husband and a group of their friends. Friday morning, while their husbands were out golfing, Michelle and her friend noticed an unexpected visitor leaning on the back door of the cabin, WATE reported.

"She just started pointing and I was like, 'what?' and so I turned and looked and there's a bear just putting his full force on the door. And then the door opens," Eberhart said.

A somewhat bizarre viral video shows a monkey snatching a toddler off of a bench in Surabaya, Indonesia.

Just that quickly, the bear broke right through the locked door and was inside the cabin. The women immediately went to a bedroom for safety.

If one bear inside the cabin wasn't scary enough, there were three more bears lingering around the porch.

"It was just almost surreal, it was just a fight-or-flight, like I just have to remove us from this situation and make sure that we're at least in a safe place," Eberhart said.

The Tennessee Wildlife Resources Agency knows a lot about East Tennessee animals like black bears, which are coming out of winter hibernation.

"It's really not typical bear behavior for them to come on to someone's porch and start looking for food. That means those bears have been around humans and have received handouts or have found a food source around a dwelling," Cameron said.

The police were called, eventually getting the bear out of the cabin and the other three bears away from the porch, but the bears did not leave without taking a few souvenirs with them.

"They got 5 pounds of Reese's Peanut Butter Cups and a pound of M&M's and two pounds of Sour Patch Kids and two bags of potato chips, two beers and two Diet Cokes and about 20 Zyrtecs." Eberhart said.