Coronavirus provokes spike in need for US food pantries, which struggle to meet demand

KTRK
Food pantries stay busy even in the best of economic times, but the coronavirus pandemic has prompted a spike in demand as millions of people find themselves furloughed, laid off or with businesses that have suffered huge financial blows.

Videos from across the country show hundreds of cars lining streets and people waiting for hours in hopes of getting food. For some, this is their first time.

"I just had to get past those feelings of shame, and know that I was doing it for my family," said Erica Aguirre-Campos.

The recently divorced mother of three lost a third of her income after her ex-husband lost his job. She said she's struggling to work from home while he homeschools the kids.

"We are running low on milk, that milk will be gone by tomorrow ... what is the worst-case scenario? Like, what if I can't figure out food?" she said.

Aguirre-Campos and her family are not alone.

According to the Department of Labor, more than 26 million Americans filed for unemployment in the past five weeks. And the food banks themselves are now facing their own shortages.

Restaurants, hotels and resorts -- many of which are shuttered or sharply limiting their operations --are no longer supplying them with food, while other suppliers are busy restocking grocery shelves. Farmers have switched from shipping vegetables and meats in bulk to individual packaging for grocery stores.

Feeding America has seen an increase in demand from 98% of its member banks, according to a recent survey. The average increase for a member was 63%, while 95% of the association's food banks reported an increase in operating expenses, the organization said.

Yet food banks have had to devise creative new ways to distribute ever greater amounts of food while keeping both recipients and their staff safe from exposure to the coronavirus.

The San Francisco-Marin Food Bank in California has built "pop-up" pantries after some of its previous 275 or so sites had to stop operating during the pandemic, spokeswoman Keely Hopkins said. The new sites, many of which are serving hundreds of people per day, stay open for longer hours and use open spaces such as parking lots to facilitate social distancing, she added. 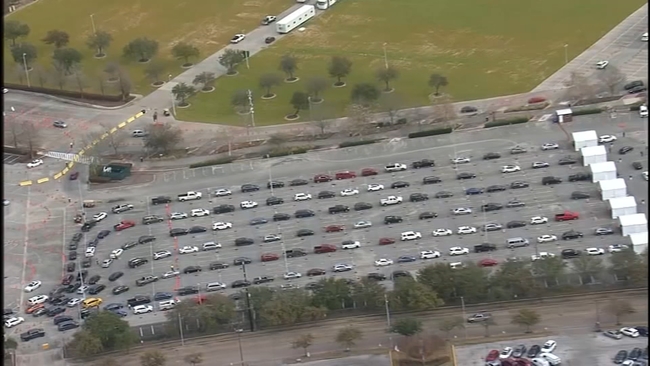 Doctor gets in shootout with robbery suspects in NW Harris Co., deputies say

Police stop stolen truck with 'explosive-type' items inside
Warm weekend but cold front on the way
How the 2021 winter storm happened
Suspect arrested in Texas State athlete's murder, police say
Could this be final stimulus package with a check?
Show More
104-year-old left without running water for a week after storm
US advisers endorse single-shot COVID vaccine from J&J
Mother killed when wheel flies off truck and through her windshield
Grandma in Spain given 3 months in Houston to see dying grandson
Ted Cruz says Trumpism 'ain't goin' anywhere' at conference
More TOP STORIES News