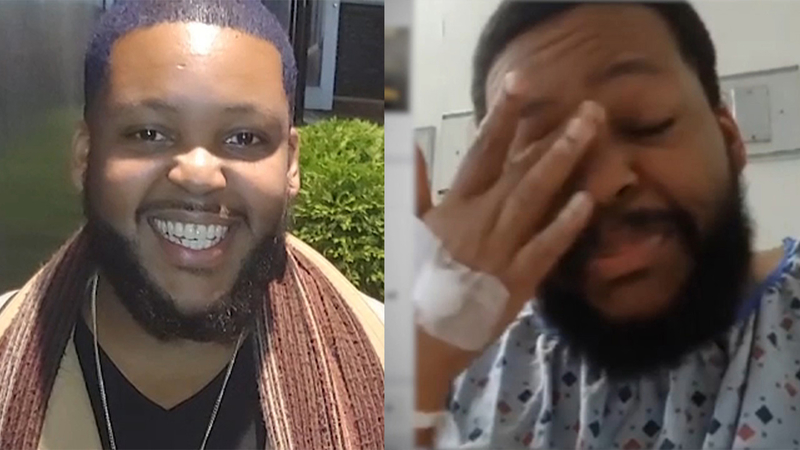 Houston man 'was at death's door' after contracting COVID-19

Hudson, a Houston native and alumnus of Kinder High School for the Performing and Visual Arts, is now taking dialysis after suffering acute kidney failure because of the dangerous virus.

Hudson entered the hospital nearly three weeks ago with what he thought was just a fever he couldn't shake. Minutes after he showed up to the emergency room, he tested positive for COVID-19 and he was eventually placed on a ventilator.

"My mom said, 'Baby, no. You were asleep for five days. You were on a ventilator,'" said Hudson. "She said, 'The term 'You were at death's door' is real for your life.'"

Hudson spoke with ABC13 while he was in the hospital. He said he had no idea that the city he calls home had become the epicenter of coronavirus in the United States, with nearly 78,000 confirmed cases and more than 6,200 deaths so far, but he said his family knew.

His parents and siblings in Houston were in contact with his doctors and were worried.

"My sister said, 'You had pneumonia and they had to put you on a ventilator because you had pneumonia,'" said Hudson. "In the decision process, your kidneys shut down and we had to make a decision about that."

The professional singer, musical theater teacher and choir director, who has no underlying health problems, was in the ICU for six days. He woke up to the amazement of his doctor.

"He said, 'Many people in the ICU just didn't make it out, and you did.' He said 'I'm so happy to see you and I'm so happy you're still here,'" Hudson said while holding back tears.

"I'm alive," shouted Hudson. "To God be the glory for the things that he's done."