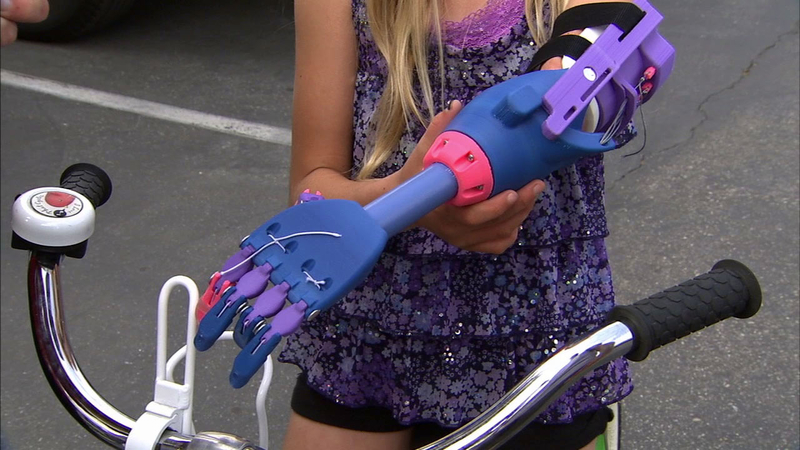 Faith Lennox's left hand was amputated when she was just 9 months old. Faith had compartment syndrome when her position during childbirth cut off the flow of blood to her left forearm, irreparably damaging tissue, muscle and bone.

On Tuesday, the Lakewood girl received her new robohand.

"She's going to have a bright future. Everything looks a little bit easier," said her father, Greg Lennox. "Riding her bike, she used to lean over a lot, and she's already sitting straight up now."

The emerging technology of 3-D printing is revolutionizing prosthetics. And in time, the arm can be made more sophisticated.

The cost, at $50 a piece, makes the technology very affordable, especially when a growing child needs a new one every six months.

While Faith has learned how to get by with just her right hand, the robohand is going to change her life, and she even got to pick her favorite colors for her new hand -- blue, pink and purple.

"It's really cool," she said with a giggle.

Faith's parents were working with the nonprofit group E-Nable to get her a 3-D-printed hand, but the technology is so new there's a waiting list, her mother said. Then she learned of what Build It Workspace could do from a friend whose son visited with his Scout troop.

Build It Workspace was founded less than a year ago by mechanical engineer Mark Lengsfeld. While the small company has printed out everything from pumps for oil and gas companies to parts for unmanned aerial vehicles, this was the first hand that they built.

Mark Muller, a prosthetics professor at California State University, Dominguez Hills, helped with the design. He says a heavier adult model with sensors attached to a person's muscles would run $15,000 to $20,000.