Driver dies after slamming into SUV stopped at red light 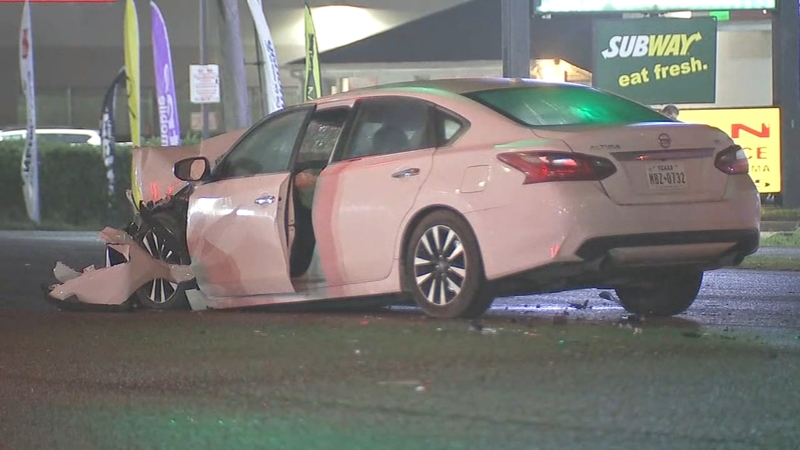 One person is dead after he slammed into the back of an SUV stopped at a red light early Monday morning in west Harris County.

Authorities say the driver of a white Nissan Altima was going at least 60 miles per hour on Highway 6 at Empanada, when he crashed into the back of an Infiniti SUV.

The impact pushed the SUV about 200-250 feet off the road, causing it to nearly crash into the glass wall of a shopping center.

The SUV driver was taken to the hospital with minor injuries.

@HCSOTexas units are at the scene of a fatal crash at 7599 Highway 6 South/Empanada Drive. Two vehicle crash, with one adult male confirmed deceased and another transported to the hospital. #HouNews pic.twitter.com/cGZm2844Qp

A driver going the other way happened to catch the crash on his dash cam. It's not clear why the driver of the Nissan didn't seem to slow down.

"He appeared to be moving, and he never appeared to slow down at all before striking the other vehicle," said HCSO Sgt. Deshana Cheek-McNeal. "Right now, our investigation is trying to figure out if there was a distraction in the vehicle, if he fell asleep, what caused him not to stop, and to strike that vehicle from behind."

The southbound lanes of Highway 6 were closed for a time due to the crash Monday morning.

Here’s a close-up look of the car that slammed into back of SUV. Investigators trying to figure out why the driver of this car didn’t stop or slow down. Did he fall asleep? #abc13 pic.twitter.com/AO3f47XRv4

Driver of Nissan Altima, man in his 20s, died after he slammed into back of an SUV stopped at a red light, investigators say. Look at how far that SUV traveled—almost into glass wall of strip mall. #abc13 pic.twitter.com/1cAgTSjYUb

SB lanes of Hwy 6 closed at Empanada Dr in Mission Bend. Nissan Altima slammed into the back of an SUV stopped at a red light. Nissan driver is dead. Infiniti driver taken to the hospital. #abc13 pic.twitter.com/2G5ngfHj0c