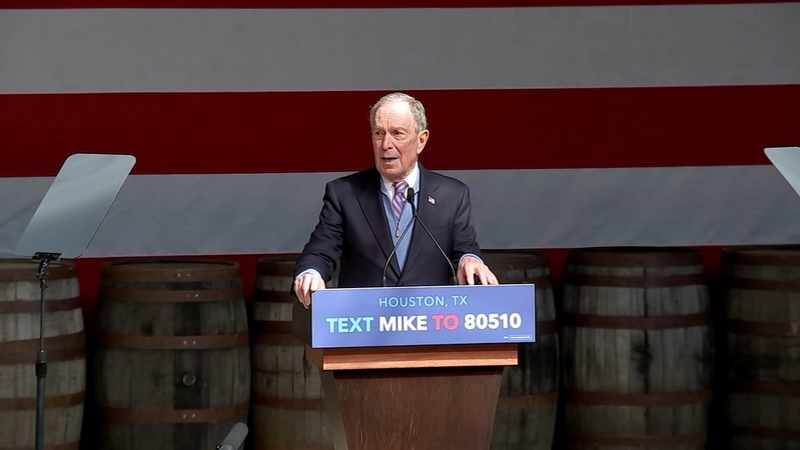 Michael Bloomberg in Houston ahead of Super Tuesday

HOUSTON, Texas (KTRK) -- No Democratic candidate has been to Houston more since announcing a run for the presidency than Mike Bloomberg, and he was in the Bayou City again Thursday ahead of Super Tuesday.

With an introduction from Houston Mayor Sylvester Turner, who endorsed Bloomberg earlier this month, the self-funded candidate took the stage downtown and immediately talked Texan.

"I considered waiting a couple more weeks to return, but the combination of Rodeo and Lizzo was just pretty tempting," he said. "But I couldn't wait that long for another box of Shipley's (doughnuts). "

The former New York City mayor and billionaire who has flooded the airwaves with television ads asked Houstonians again for their support at the polls, and made the case why he should be the eventual nominee.

"We need a president who will make protecting the health of the American people their number one priority at all times, and I can promise you that is the kind of president I would be," he said to an estimated crowd of 400. "We now only have five days until Super Tuesday and we need Clutch City to come through. "

If you vote for me, I can tell you what we’ll do to Donald Trump:

Super Tuesday is the first time Bloomberg's name appears on a primary or caucus ballot. He starts the race in the hole, delegate-wise, but as his team told ABC13's Tom Abrahams on a conference call this week, they are confident they can make it up.

Which is fitting, because Tuesday is the Texas primary.

Tuesday is the first step in defeating Donald Trump.

Here in Texas, I’ve been building a movement to bring the fight straight to Trump.

With your help, we’ll win. pic.twitter.com/6yYcPW2UNO

They expect good things on Tuesday, saying on that call they have been focused on building a national campaign they believe is unmatched among their competitors.

"I've never worked in Washington and I don't make pie in the sky promises and I don't talk until the cows come home. And as you've seen in the debates, I'm not someone who just yells slogans even when they're not true," he said. "We need to nominate someone at the top of the ticket who can build a broad coalition that rallies Democrats and attracts Independents and moderate Republicans, and that's what I've done in all the three races that I've run in New York City, and I've won them all. "

Texas is a place where a man is measured by his word, so here’s mine:

If you vote for me,

I will defeat Donald Trump.

I will fight to bring affordable health care to every American.

I will continue to fight to protect our planet and address the crisis of climate change. pic.twitter.com/fPUArGL2rl

Bloomberg will make another stop in Texas before Election Day. He'll be in San Antonio Sunday, making a case to voters there.