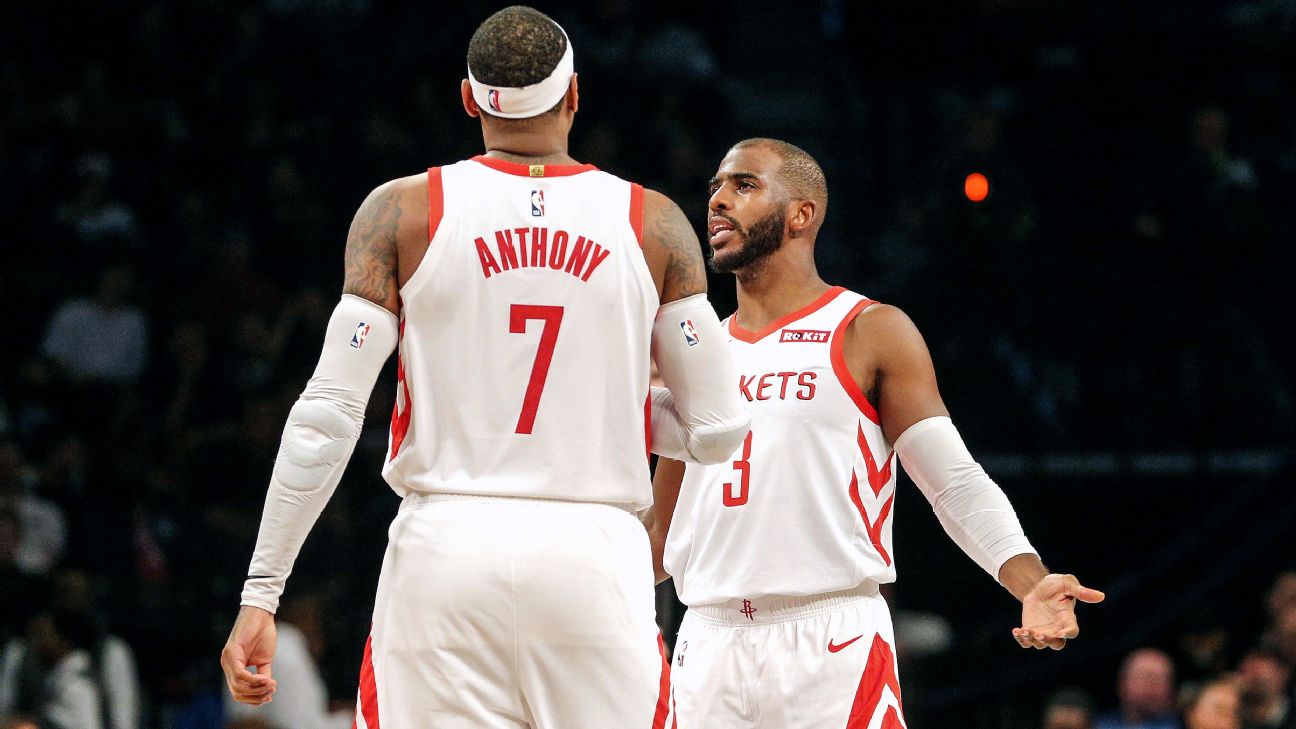 PORTLAND, Ore. -- Carmelo Anthony and Chris Paul have a lot of shared basketball history after almost two decades in the NBA, but one specific tie between the two former All-Stars has bound both proud men over the past year: their respective unceremonious divorces from the Houston Rockets.

Anthony, who was exiled by the Rockets after just 10 games last season and ultimately traded to the Chicago Bulls with cash in a separate transaction, struggled to find a job in the league this season before being picked up by thePortland Trail Blazerslast month. He said he wasn't surprised by the way Paul's deal was handled and that he had in fact warned Paul.

"No, I wasn't surprised at all," Anthony told ESPN after his team's108-96 loss to Paul and the Thunder on Sunday. "When my situation happened in Houston, he was the first person that I called to come to my room. And we had to clear some things up, and I wanted to know if he had anything to do with it. And that was the first thing that I wanted to know, and he told me, 'No.' And from that point on, I told him, looked him in his eyes and said, 'Look, just be careful.' You know what I mean? Just be careful. And damn sure if [the same situation] didn't happen to him."

Paul, who was traded to the Thunder last summer as part of a package that sent Russell Westbrook to the Rockets, recently told The Undefeated's Marc Spears that Rockets GM Daryl Morey told Paul he would not be moved, but then the player was dealt a few days later.

"I was shocked," Paul told The Undefeated. "Truth be told, I just talked to Daryl a couple days before the trade, and he said he wasn't going to trade me [to Oklahoma City]. That's funny because that is going to be the alert that pops up on everybody's phone because nobody knows that. But what the hell, I just said it."

Anthony said he has no ill will toward Morey or the Rockets, but he admitted that the sting of not being told why he was let go bothered him for a while.

"I haven't talked to nobody in their organization, no," Anthony said. "I'm not angry. I'm not bitter at it. It happens. I wish I had an explanation when it happened, but I'm past it."

When asked whether there's a feeling in the league that Morey and the Rockets might not be straight shooters after the situations with both him and Paul, Anthony took a broader approach with his response.

"Well, nobody has an answer, right?" he said. "My situation and Chris' situation is totally different, but nobody has an answer. Like, nobody really has an answer for my situation. Still. The only people that know is me. Me and them. That's it. And I don't even think they know. It's just something that was already established before I even got there. It was on a trial-run basis. You look back at it, and 10 games is an evaluation. So that's the business, right? You see New York have a press conference eight games in, 10 games. So that's the new analytics. That's the new game. Everything's based off of your first 10 games. And once you know that, it gives you clarity on a lot of things."

Anthony and Paul exchanged hugs before Sunday's game and are enjoying the fact that they get to face off at least a few more times in the league. But Anthony noted that after Paul was dealt from the Rockets, the veteran point guard didn't call to tell him that his prediction about how Paul's future in Houston might unfold had come true.

"No, he didn't say I was right," Anthony said. "He was in Vegas when all of that happened, so we was talking. And when I talked to him, he was like, 'Man, look, I understand it. It's messed up, but I understand it.' And for me, I'm like, 'Yo, it took me months to kind of, like, get past that.' My pride was hit. My ego was hit. I had to really get past that. To a point where it was like, 'Man, Chris, is you good?' I wanted to make sure he was good. So he told me he was good, and that was that." 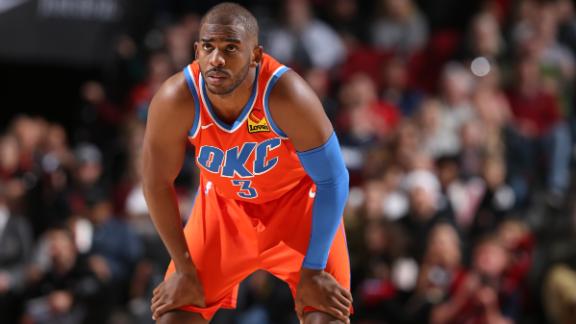