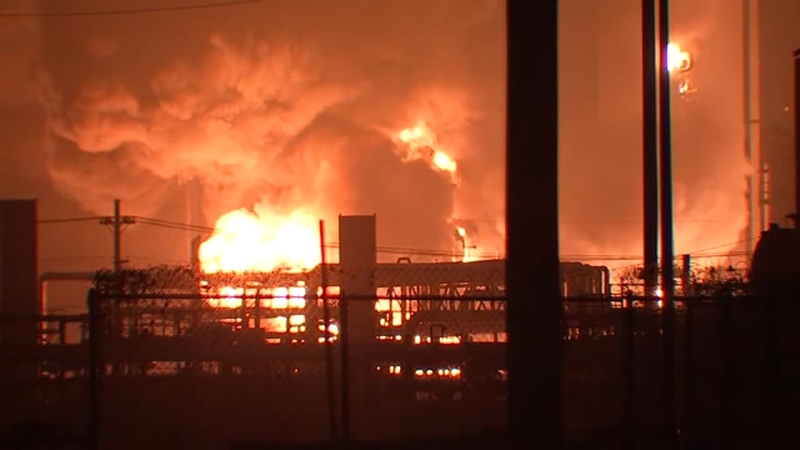 Evacuation and curfew ordered for miles around TPC explosion

Two employees and one contractor were injured in the initial blast at 1 a.m., but all were treated and released from hospitals, officials said.

The EPA reports that TPC has been among the "high priority violators" every quarter since Jan. 2017, with additional violations dating back to at least 2004. TPC has paid at least $180,000 in fines in the past 5 years.

TPC also received a penalty for an OSHA violation. According to OSHA, they received a $11,224 penalty for a serious violation on Nov. 1, 2016. TPC was cited for "safeguards for personnel protection." It appears there was an informal settlement and the penalty was reduced to $6,735. The company was also cited for "selection and use of work practices."

The Texas Commission on Environmental Quality says the incident is causing the release of chemicals called volatile organic compounds (VOCs). Elevated levels of VOCs from this facility are odorous. Short-term exposure to high concentrations of VOCs can cause eye, nose, and throat irritation, shortness of breath, headaches, and nausea. If you experience these health effects, leave the area until the situation has resolved.

As an evacuation order was underway, nearby residents and drivers captured horrifying images of the explosion and damage it left behind.

Watch full coverage of the plant explosion in Port Neches, where some people said they felt it shake their homes at least 10 miles away.

TPC said the injured workers were all transported to hospitals and were treated and released. One worker suffered a broken arm. Another was flown to Memorial Hermann-Texas Medical Center after they inhaled hot air, White said.

Jefferson County Judge Jeff Branick says there are no reports of major injuries to people outside the plant.

RELATED: People living within four miles of the plant were ordered to evacuate.