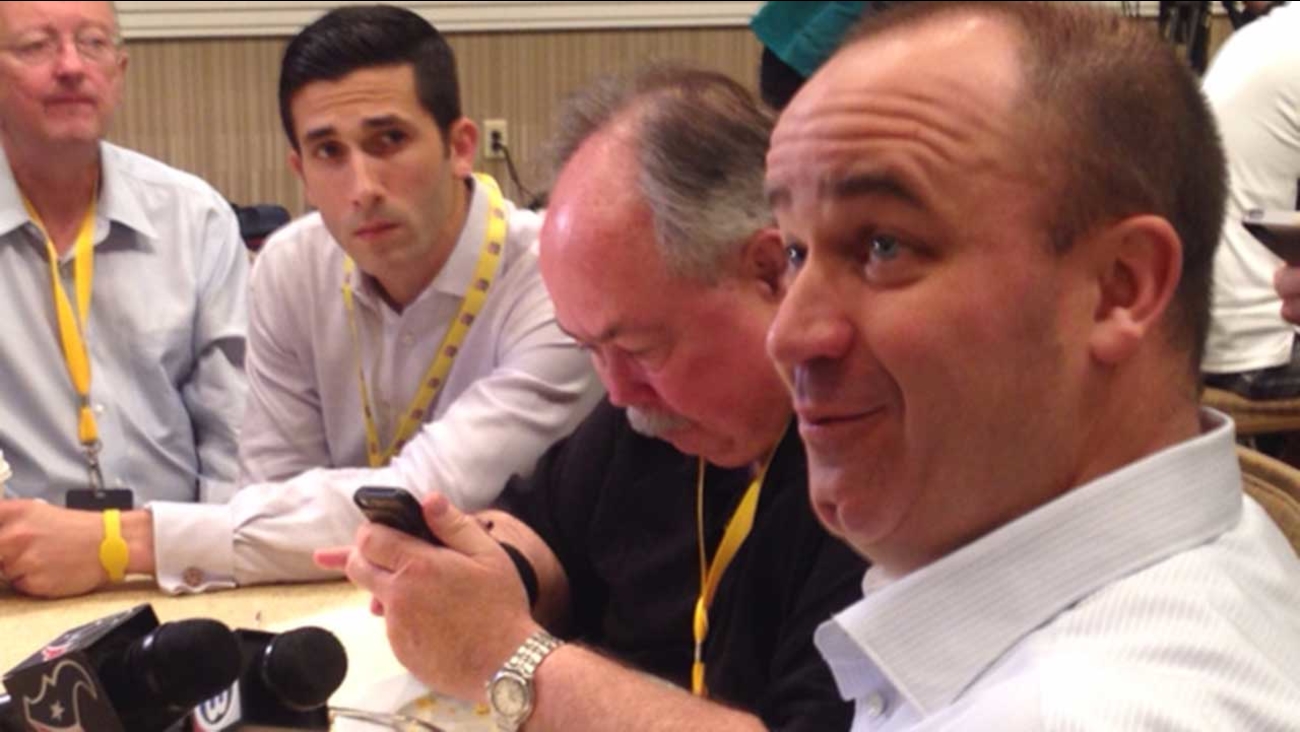 PHOENIX, AZ (KTRK) -- Day three of the owners meetings brought the AFC coaches front and center for the off-season. It was the head coaches' breakfast. Our David Nuno sat with Texans head coach Bill O 'Brien. Watch ABC13 all day for our one on one with O'Brien.

Here are some of the topics covered at the morning breakfast:

On this offseason
I look at it this way, free agency is a stage, of putting a team together. And that is not over yet. Then it's the draft and we are deep into our preparations for the draft, the first weekend in May. Then, one of the critical times for us is - post draft. With the college free agents. That's a stage.

On Clowney
I would say with JD, I think he is rehabbing very well. In fact last week he had a great week. He had his best week of rehab. As far as putting a time of when he will be back on the field with pads, I wouldn't be able to do that for you right now but I like the way he is progressing.

With JD, it is all going to come down to what he does when he puts the pads on. How he plays, can he stay out there, how he takes care of his body because there is no question about his ability to go out there and affect the game.

On Nix
I have not seen Luis Nix, so I don't know. He is working out in Florida. I haven't seen him but that's their prerogative. Don't read anything into that.

More Nix - on what he wants to see:
I would say the ability to make it through a practice. That would be the biggest thing I'd need to see.

On Andre Johnson
I've said this all along. I've been fortunate to coach some of the best players at their position in this game. Whether it was Tom Brady, Randy Moss, Andre Johnson, Wes Welker, Logan Mankins, you know all these guys I've been involved with. JJ Watt obviously. I am just fortunate to have coached and had a chance to be with Andre for a year and like I said, he will go down as one of the best ever to play that position.

On DeAndre Hopkins
Basically last year was his best year. He had a really productive year. The thing that we really like about Hop and we want him to continue to work on is work ethic. He is a hungry player. He works every single day. He came into the spring a year ago, and learned the offense. He was kind of thinking out there and then all if a sudden he just took off so we just want to see him continue to progress. We think he can be, we think he is one of the best. We have a lot of confidence in him.

On Brian Hoyer
Brian Hoyer is a very competitive guy, personable guy, football means a lot to him. He is a great family guy, basically a new father. He has two young children. I've known him since his rookie year and he is a guy that perseveres. He has good leadership qualities. He has won games in this league, he is a good fit for what he we do and basically in a different way I would say about Ryan Mallett, id say similar things.

On Watt
I broke down every player. When I broke him down. Out of all the plays he played, I think he had 120 plays that he had either a TFL, a quarterback hit, sack, a batted ball, an interception, a fumble recovery, a caused fumble, on 120 plays he did one of those 7 things, and now he is out there in Wisconsin and he is trying to get better. And he knows that he has no limits.