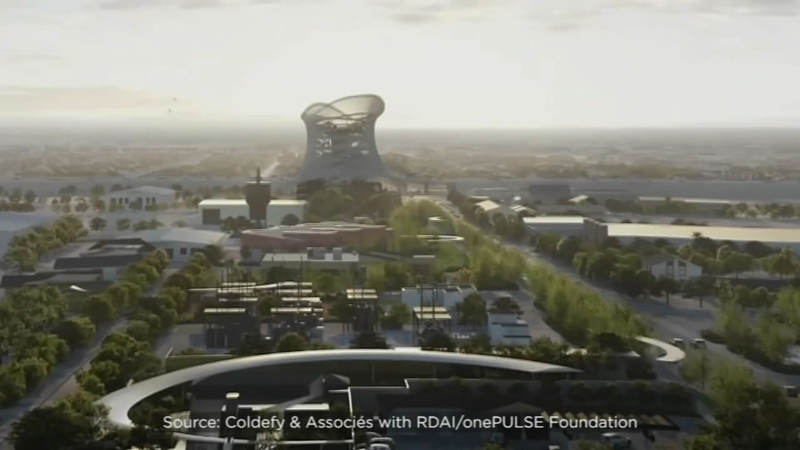 ORLANDO, Fla. -- A memorial for Florida's Pulse nightclub massacre will have a reflecting pool with rainbow-colored lines radiating from it, and a nearby museum will resemble a three-dimensional spirograph, according to design concepts announced Wednesday.

The design concepts are only a starting point for discussions on the Pulse memorial and museum and are open to revisions, according to organizers.

The designs were produced by several French architects and artists who worked with an Orlando architectural firm and a DePaul University professor.

A memorial for Florida's Pulse nightclub massacre will have a reflecting pool with rainbow-colored lines radiating from it, and a nearby museum will resemble a three-dimensional sp

Plans call for the memorial to feature a garden with 49 trees in honor of the victims who were killed.

The museum will have open-air areas, a vertical garden, public plazas and a rooftop promenade, according to the design concepts.

Members of the public left 2,300 comments about the six finalists, which had been whittled down from 68 submissions.

The memorial will be at the site of the former nightclub and the museum will be a third of a mile away.

Both are slated to open in 2022.
Report a correction or typo
Related topics:
societyfloridamuseumsu.s. & worldmemorial
Copyright © 2021 by The Associated Press. All Rights Reserved.
TOP STORIES
Scattered storms will fire up as a cold front stalls over Houston
6 shot, including a child, within 45-minute span overnight
Teen girl's remains found in secluded area of Wharton County
Texas jobs still hard to come by as extra $300 ends this weekend
Walgreens giving out rewards cash as in-store vaccine incentive
Houston Dynamo FC welcomes real estate developer as new owner
Sorry, Harden: These former Rockets still in hunt for NBA title
Show More
What is critical race theory? Explaining what Abbott wants to 'abolish'
Man charged in shooting deaths of his girlfriend and her mother
Photos released after 19-year-old woman's murder in NW Houston
Woman shot in the face while answering her front door, HPD says
70% of Americans 30 or older have gotten COVID-19 vaccine
More TOP STORIES News