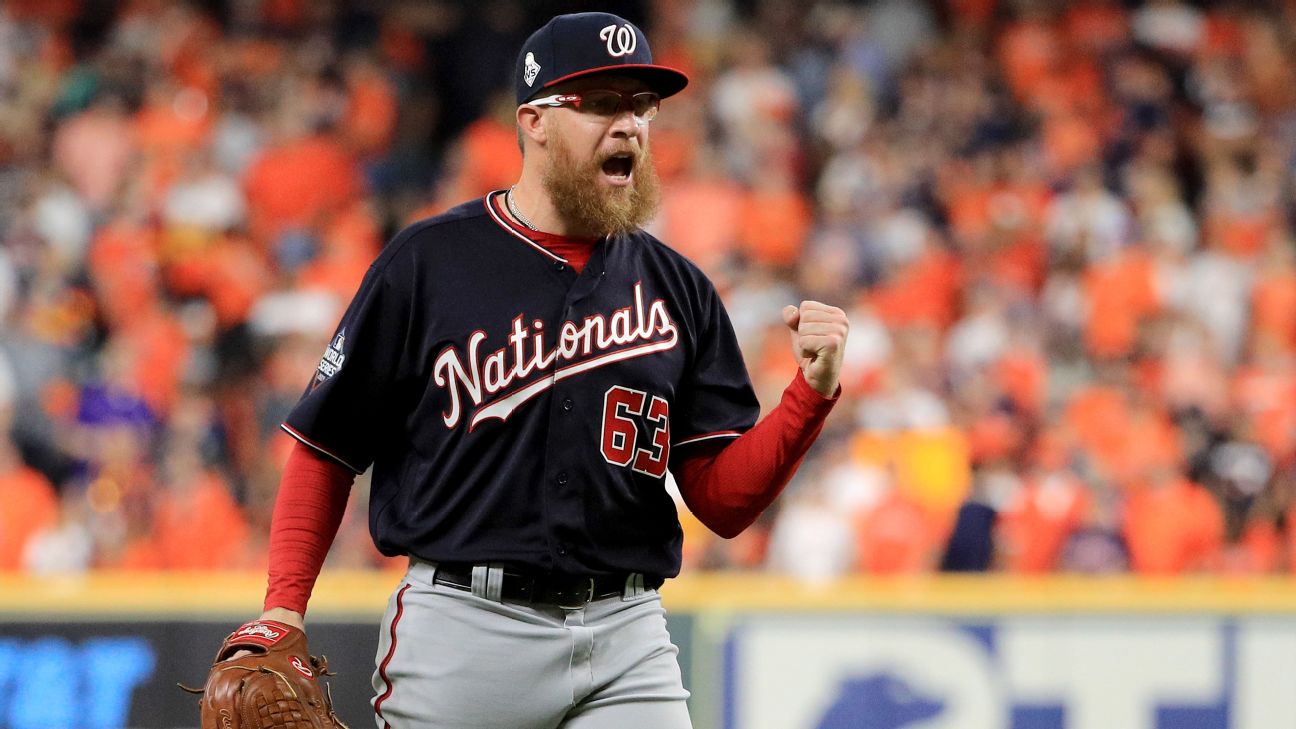 HOUSTON -- Max Scherzer threw 112 pitches in five innings. The only inning he threw fewer than 20 was his final one. Tanner Rainey came out of the bullpen, served up a home run and walked two batters while recording only one out. Daniel Hudson got four outs but gave up three hits and a run.

Sounds like a good way to lose Game 1 of the World Series.

Can Washington win three more games this way? Probably not. TheNationals need their starters to go deeper into the game. Heck, they are carrying only 11 pitchers, including two who haven't even pitched in the postseason and another who has recorded only one out. The Astros left 11 runners on base, went 3-for-12 with runners in scoring position and missed a tying home run by a foot or two.

"This is just a team win," Scherzer said. "When you look at this, there is not one guy that won this game. It was a collection of everybody. Up and down the lineup, in the bullpen, what can you say? The reason we won tonight was because of everybody in this clubhouse."

Here's what kind of a sweat it was for Scherzer. Only once before in his career had he pitched five or fewer innings and thrown more than 112 pitches -- a start against theNew York Yankeesin April 2012 when he walked seven batters in 4 innings and threw 119 pitches.

"It was crazy," he said. "Everything's on the line. That lineup is great. They absolutely grinded me, never let me get in rhythm. I was having to make pitches out of the stretch from the first inning on. For me, I just stayed with Zuk [catcher Kurt Suzuki]. Zuk called some big-time pitches for me tonight."

Scherzer walked George Springer on seven pitches leading off the Houston first, leaving a 3-2 slider up in the zone. The Astros would score two runs in the inning to grab a quick lead. Scherzer would go to a 3-2 count on nine of the 23 batters he faced. This was not typical, efficient Max Scherzer -- not the pitcher who mowed through theSt. Louis Cardinalsin the National League Championship Series with one hit in seven innings.

Scherzer's mounting pitch count -- 48 through two innings, 96 through four -- meant Dave Martinez had to alter the script that managers attempt to plot out before the game. It meant using Patrick Corbin -- his probable Game 3 starter -- in the sixth inning. Then Rainey, the hard-throwing but erratic right-hander, in the seventh, with his two reliable relievers, Hudson and Sean Doolittle, after that.

"Max ... kudos to him. He gave us everything he had today," Martinez said. "Those guys are good, and they don't chase. They're good hitters, so he gave us everything we had; and as the game was rolling along and I started watching Max's pitch count, there was going to be an inning that we needed to use Corbin."

Corbin did his job, striking out two in a 21-pitch inning. Martinez could have -- should have? -- brought Corbin back for the seventh. Win this game and worry about Games 3 and 4 later. Instead, he gave the seventh to Rainey, who possesses a 100 mph heater but doesn't always know where it's going. He walked 38 batters in 48 innings in the regular season but also struck out 74. He had won his manager's trust with two scoreless outings against the Cardinals. Such is the life of the hot hand in October.

Springer greeted Rainey with a monster 428-foot home run to left-center, turning on a 99 mph heater. Rainey struck out Jose Altuvebut walked Michael Brantley and Alex Bregman. Hudson would get out of the inning, striking out Yordan Alvarez on three 96 mph fastballs with the bases loaded -- maybe the biggest out of the game. Hudson gave up a run in the eighth on Springer's RBI double off the wall that just missed tying the score. Doolittle got the final out of that inning and pitched a 1-2-3 ninth.

"If all the games are like this, it's gonna be a fun World Series," Corbin said.

It also means Martinez might have to adjust his rotation. This was probably the one opportunity he had to use Corbin in relief, and he said he would talk with Corbin and pitching coach Paul Menhart about whether Corbin or Anibal Sanchez would start Game 3. Either way, Corbin probably is unavailable for Game 2 -- although if the contest is on the line, you never know.

Martinez also said after Game 1 that Scherzer isn't a realistic relief option, which he was in the division series against theLos Angeles Dodgerswhen he pitched one inning.

"I don't foresee Max coming out of the bullpen," Martinez said. "I don't. We need him down the road again. Corbin had a bunch of days off. It was his bullpen day again, so I was gonna try and utilize him if we had to, and he came in and did great."

The good news for Martinez and the Nats: Stephen Strasburg, with a 1.10 career ERA in the postseason, gets the ball for Game 2. Strasburg has gone six, six and seven innings in his three postseason starts, which means ... well, if Strasburg goes only six innings, it means Martinez will have to get nine outs from his bullpen. Maybe that means just Hudson and Doolittle. Maybe it means Rainey again; Martinez made a point to tell reporters that he told Rainey immediately after Tuesday's outing to be ready for Game 2. Maybe it means, yes, Fernando Rodney.

It means it won't be easy. It's the World Series. It's not supposed to be easy. 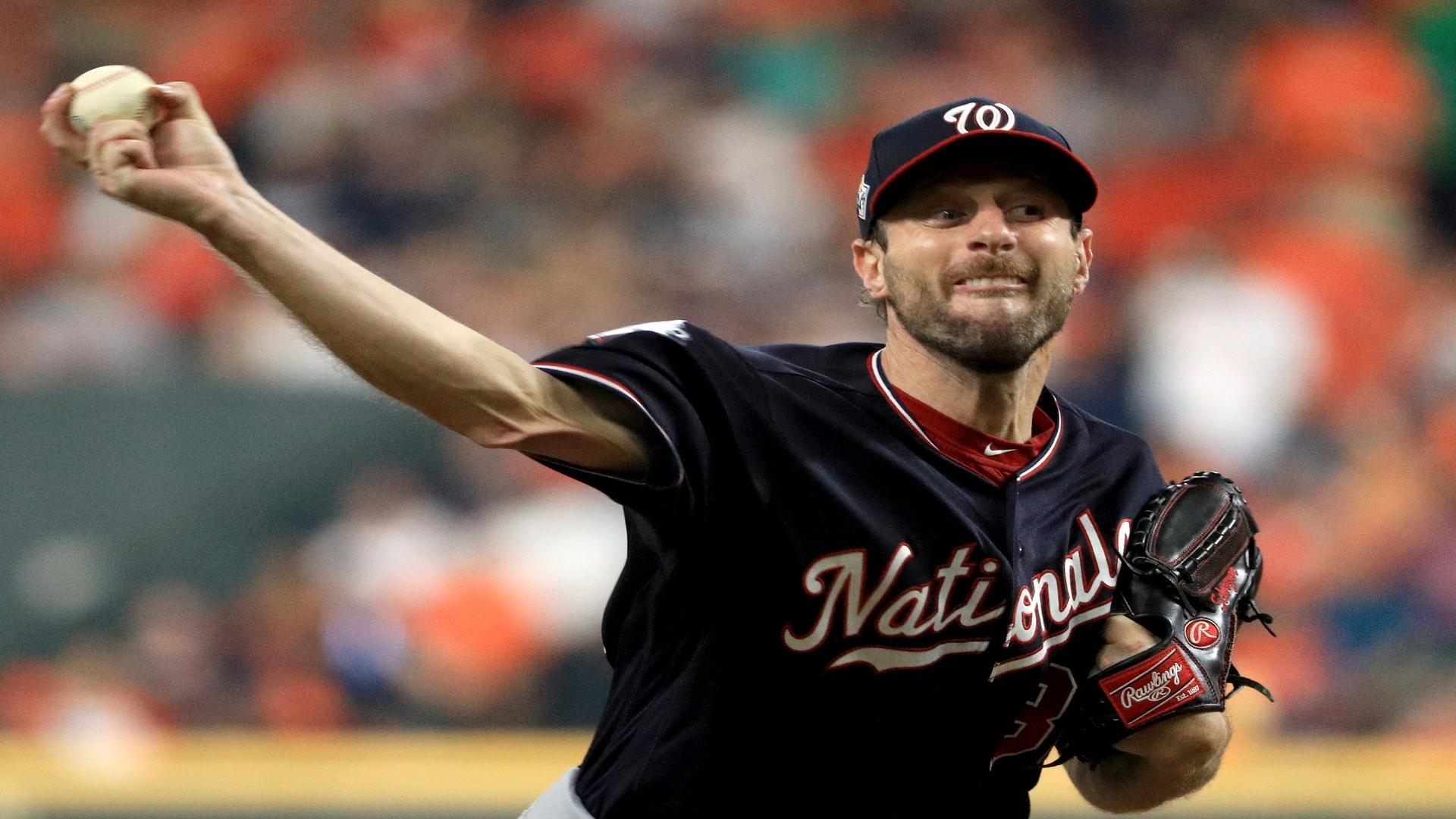 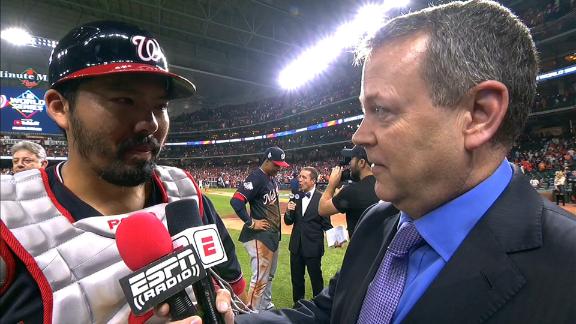