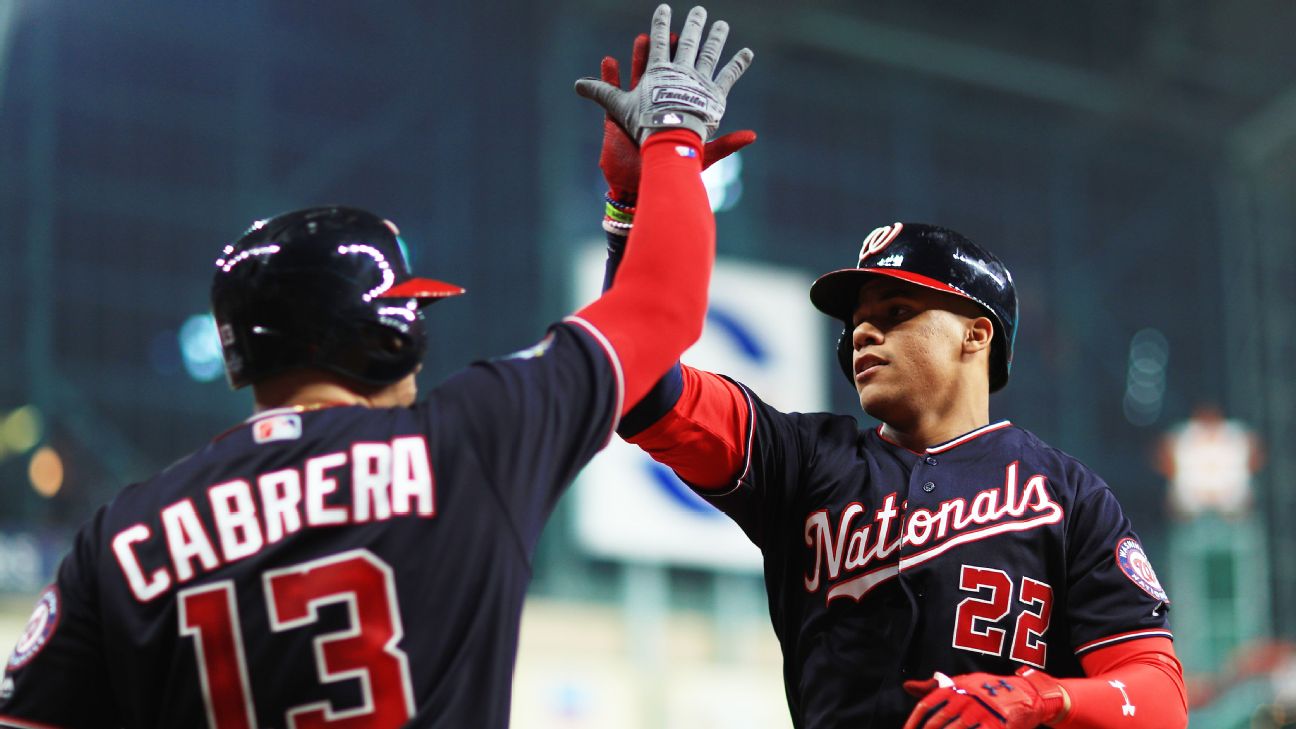 HOUSTON -- With Max Scherzer facing Gerrit Cole in Game 1 of the World Series, we had grand visions of an epic pitchers' duel between the three-time Cy Young winner and the hottest pitcher on the planet.

The Washington Nationals beat the Houston Astros5-4 in an action-packed thriller Tuesday night, as the two starters combined to allow seven runs and 13 hits over their 12 innings. Juan Soto and George Springer performed heroic feats of strength, and the Nationals' bullpen huffed and puffed to the end but managed to prevent Washington's lead from being blown, immediately flipping the script in a World Series in which the Astros entered as the biggest betting favorites since 2007.

This game will be remembered for 20-year-old super sophomore Soto twice beating Cole in the matchup of the phenom of phenoms against the ace of aces. Soto crushed a 417-foot home run to the opposite field in the fourth inning, then lined a two-run double with two outs -- opposite field again -- off the wall below the Crawford Boxes in the fifth inning. The first blow tied the score at 2, and the second capped a three-run rally to give the Nationals a 5-2 lead.

The unbeatable Cole, riding a streak of 19 consecutive winning decisions stretching back to May -- the Astros hadn't lost a game started by Cole since July 12 -- proved beatable after all. Soto, who hit .188 with seven strikeouts in the Nationals' sweep in the National League Championship Series, proved why he is too good to go into any extended slump.

Before the game, Astros manager AJ Hinch discussed facing the Nationals' lineup with a 12-man pitching staff of all right-handed pitchers. "Soto is going to be a big part of this series," Hinch said. That's not particularly prescient -- Soto, after all, is Washington's cleanup hitter -- but there is little doubt that the Nationals' lineup needs Soto to produce. The Nats beat theSt. Louis Cardinalswithout him doing much, but they're unlikely to beat the Astros if he hits .188 again.

Soto led off the fourth on Tuesday. He took a slider for a ball and then jumped on a 96 mph fastball up in the zone, hitting the ball into an area of Minute Maid Park where few lefties not named Yordan Alvarez have gone this season.

His two-run double came in the fifth with two outs and runners at the corners. Cole fell behind 3-0 but elected to go after Soto, and the youngster lined a 3-2 slider over Michael Brantley's head.

One storyline heading into the series was that the Astros were fortunate to beat theNew York Yankeesin Game 6 of the American League Championship Series. That meant they didn't have to use Cole in Game 7 -- which lined him up to start Games 1 and 5 of the World Series, rather than Games 3 and 7. No pitcher is a sure thing, even a guy riding a 19-game winning streak and especially when matched up against Scherzer; but a key reason the Astros were favored in the series was Cole starting Game 1 instead of Zack Greinke (who lost the series opener to the Yankees).

The Soto matchups are especially intriguing because the Astros love to throw four-seam fastballs up in the zone -- one of their analytical staples. Soto, however, is a terrific high-ball hitter, with the second highest OPS in the majors on pitches in the upper half of the zone. Thus strength versus strength. After the game, Soto even said he was looking for a fastball from Cole. We'll see how Justin Verlander attacks Soto in Game 2. I suspect the Astros will be very cautious on how many four-seamers they throw Soto.

Springer loves the World Series, setting a record with a home run in his fifth straight World Series game and nearly tying the game in the eighth with his RBI double off the top of the wall in right center. As clutch as Jose Altuve was in the ALCS, Springer sets the tone at the top of the lineup, and he had hit just .152/.235/.283 the first two rounds. The Astros didn't exactly light it up against theTampa Bay Raysand Yankees. Getting Springer going is a huge key.

The other big key: Getting Yordan Alvarez going. He hit .171 with 19 strikeouts in 11 games in the first two rounds. He went 2-for-3 with a walk in the Series opener. Given the bottom of the Houston lineup (Martin Maldonado and Josh Reddick in Game 1) isn't too scary, the Astros absolutely need Alvarez to do some damage.

Remember, Nats manager Davey Martinez is basically working with an eight-man pitching staff. Two of his relievers haven't pitched in the postseason, and a third has recorded just one out. That's why he used Patrick Corbin in the sixth inning after Scherzer was removed after five innings and 112 pitches. That might be the one bullet for Corbin, however, as he'll have to start Game 3 or Game 4. Martinez said he'll determine the order for Corbin and Anibal Sanchez after talking with Corbin and pitching coach Paul Menhart. That's a big decision since the Game 3 starter will be lined up to start Game 7.

Otherwise ... still some huge question marks about the Nationals' bullpen. Tanner Rainey gave up the home run to Springer in the seventh and walked two batters while getting just one out, but Martinez said after the game that he told Rainey to be ready for Game 2. Daniel Hudson gave up three hits in 1 innings. Sean Doolittle did his job, getting all four batters he faced. If Stephen Strasburg can't go more than five innings in Game 2, it will be intriguing to see how Martinez pieces things together. 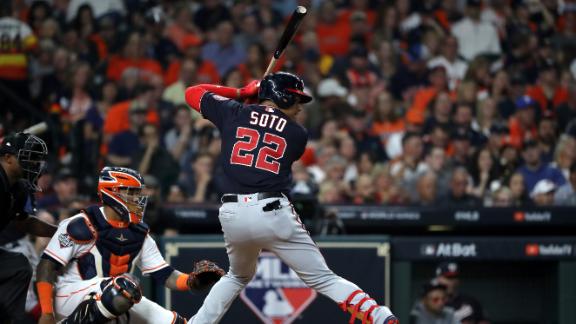 Soto comes up clutch in Game 1
Juan Soto hit a solo homer in the top of the fourth inning to tie the game and a two-run double in the fifth to give the Nationals a 5-2 lead. 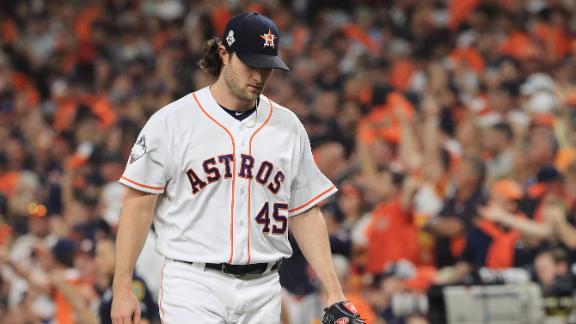